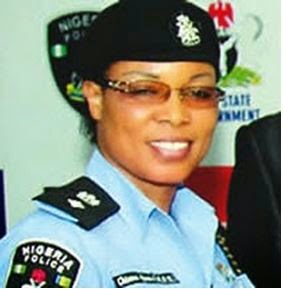 The Divisional Police Officer of the Ogudu Police Division, Lagos State, Mrs Chioma Ajunwa, on Monday attacked vendors selling PUNCH and other Newspapers in the Ogudu-Ojota area of Lagos State.

It was learnt that Ajunwa confiscated the newspapers and ordered that the men stop displaying them. The DPO, who is an Olympic Gold medalist, was reacting to an earlier report by PUNCH on the seizure of some newspapers last week and the demand for a N5,000 bail (bribe) for the vendor arrested.

It would be recalled that PUNCH had reported on Friday that Ajunwa seized newspapers displayed at one of the junctions on the Ogudu-Ojota Road.

She was also reported to have arrested one of the vendors, Idongesit Obot, who slept behind the counter till the following day.

The sum of N5,000 was allegedly demanded for Obot’s bail, but N1,500 was said to have been paid after much persuasion with the Investigating Police Officer.

A vendor, Aniekan Jackson, said DPO Ajunwa was angry at the report and swooped on the vendors in the area on Monday. He said, “She came very early this morning (Monday), seizing our newspapers. She also chased all the vendors at the Ojota bus stop. She said she does not want to see anybody here again, adding that we should report again to The PUNCH so that they can write about her again.

The Police PRO, Kenneth Nwosu, had claimed that the DPO’s action was informed by the gridlock usually caused by readers who crowded newspaper stands every morning. He had said Ajunwa raided the area after several warnings did not yield any result.

But a newspaper agent in Ojota, Arnold Adekunle, faulted the police position, saying if the DPO really wanted to sanitise the area, she was supposed to work with the local government authorities.

Adekunle said, “The police said there had been accident on the road because of newspaper stands, how many accidents have they recorded on the road? She is just making up things. She wants to assume the position of the local government’s boss.”

Another vendor, who identified himself simply as Suleiman, added that the DPO had sworn never to allow them sell newspapers in the area.

“She said she does not want to see us again because we told you (PUNCH) that the police demanded N5,000 from us. She said we should meet PUNCH to do more stories on her.

“There is no other place where we can sell papers, except by the roadside. We have been selling newspapers there for the past 10 years, and there has never been any accident.”