If Jonathan loses, Nigeria will break - Government Ekpemupolo (aka Tompolo) 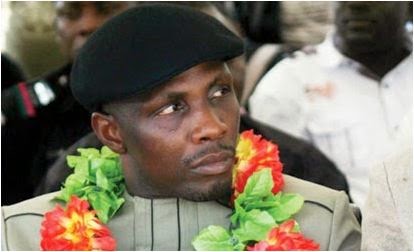 Former leader of the Movement for the Emancipation of the Niger Delta (MEND) Government Ekpemupolo (aka Tompolo) has restated the resolve of the Niger Delta warlords to make Nigeria ungovernable if President Jonathan fails to return as president in next month's general election.

In a statement released by his Media Adviser, Mr Paul Bebenimibo, in Warri yesterday January 29th, Tompolo attacked Gen Theophilus Danjuma for calling for his arrest alongside Asari Dokubo and other Niger delta warlords. He said the treaty that merged the Northern and Southern protectorate of Nigeria expired last year and everyone should be grateful to President Jonathan for keeping Nigeria together. Part of his statement after the cut...but meanwhile, the presidency has condemned this war threat from Tompolo and others..

"Gen. Danjuma and his cohorts should know that I remain resolute on my position in Yenagoa, Bayelsa State, that President Goodluck Jonathan must win this election for Nigeria to continue to stay together. Gen. Danjuma should be reminded that the devilish treaty that brought the Southern and Northern Protectorates together in 1914 expired last year. Danjuma and his likes, such as Gen. Buhari, Gen. Obasanjo and Mr. Bola Tinubu, should be grateful to President Jonathan who has been keeping this country together. If not for President Jonathan, Nigeria would not have been any more. Danjuma and his cohorts should be reminded of the saying that ‘those who live in glass house should not throw stones’. The call by Gen. T.Y Danjuma (rtd) to arrest me and other agitators for a better living for the people of the Niger Delta region is an indication that he is behind terrorism in the North eastern part of the country as well as the stoning of President Jonathan’s convoy in Kastina and Bauchi states, because he has never condemned those acts, even though Boko Haram attacked churches and mosques in his home town. Is Gen. Danjuma not aware of the peaceful atmosphere when Gen. Buhari visited Delta, Rivers and Bayelsa (home state of the President) states for campaign? Why is it that President Jonathan’s convoy was attacked in Kastina and Bauchi states without any provocation? Who is Gen. Danjuma if not for the oil wealth he is enjoying from the Niger Delta? He should be rather arrested for being behind terrorism in the North. Where was Danjuma when Mallam Ciroma Adamu threatened to make Nigeria ungovernable, if President Jonathan defeated the All Progressive Congress Presidential candidate, Gen. Muhammedu Buhari? Where was this so called statesman when the APC campaign Director General (DG), Mr. Rotimi Ameachi threatened to form a parallel government if President Jonathan wins the 2015 elections? Where was this hypocrite when Dr. Junaid Muhammed, Muhammedu Buhari and Atiku Abubakar all said in separate interviews that the nation will boil if Jonathan won the election in 2011? Is it the interest of Nigeria Gen. Danjuma is protecting or his oil bloc in the Niger Delta? Is it the interest of Nigeria Danjuma is protecting or his 50 million dollars donation to Gen. Buhari for his campaign? Let Gen. Danjuma and his cohorts know that they will not see any Ijaw man, the Igbos and others to fight on their side if the war that they are planning broke up,”.

In a related development, the Ijaw Youths Council (IYC), also released a statement signed by its spokesman, Eric Omare yesterday January 29th where they faulted the call by Gen Danjuma to arrest the Niger Delta ex-militants.

"We are surprised that General Danjuma swiftly called for the arrest of Tompolo, Asari and other Niger-Deltans, whereas he has neither condemned nor called for the arrest of those who have been consistently attacking the convoy of President Jonathan in the northern part of the country. General Danjuma’s call is not deserving of an elder statesman who is supposed to be unbiased rather than his obvious bias against the Niger-Delta people. Only yesterday, in Gombe State a supporter of President Jonathan who was pasting his posters was attacked and seriously brutalised. Why has General Danjuma not condemned this dastardly act if he is really an elder statement? There was no time at the meeting the Governor of Bayelsa State, Hon. Seriake Dickson, with youth leaders and ex-Niger Delta freedom fighters where it was resolved that Niger Delta people would destabilise Nigeria, if President Jonathan fails the February 14, 2015 presidential election. This did not form part of the resolutions of the meeting, which were read out by Hon. Kingsley Kuku for Governor Dickson to transmit to Mr. President. The meeting was called by the Governor of Bayelsa State, to solicit support for President Jonathan from Niger-Delta youths and ex-freedom fighters. However, the meeting frowned at and its dissatisfaction with the persistent attack on the campaign convoy of President Jonathan in some northern states when General Buhari, his main opponent, was protected and campaigned freely in the south during his campaign tour. Hence, the meeting condemned in the strongest terms the attack on President Jonathan and resolved that nobody can intimidate President Jonathan out of the presidential race. At the meeting, all the youth leaders and ex-Niger Delta freedom fighters resolved to put their grievances aside and agree to work for the re-election of President Jonathan. Therefore, the report on ex-militants threatening to destabilise Nigeria in the event of President Jonathan losing the 2015 election is not part of the resolution of the meeting. The meeting could not have discussed that as we are confident that President Jonathan would win the February 14, 2015 presidential election. We, therefore, call on Nigerians and the security agencies to disregard the call for arrest of Tompolo, Asari and others, which is based on a misleading report. The accusation levelled against President Jonathan by the APC is also unfounded,” the statement said.