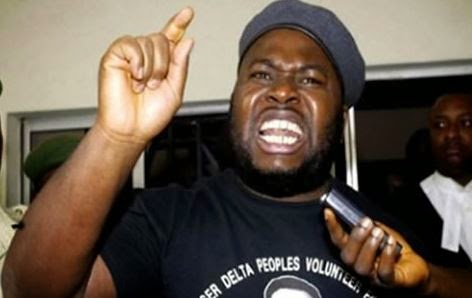 Niger Delta militants have threatened to take up arms again if President Goodluck Jonathan failed to win in the coming February 14 presidential election.

The former militants spoke when they met with the Bayelsa State Governor Seriake Dickson on Friday. They said Jonathan’s re-election is not negotiable; Nigerians must vote for Jonathan or face war.


“One thing I can assure you is that though I am retired, I am not tired. We can go back to the struggle. We own the resources and they are saying we do not have the right to rule. I will assure you that we must collect our oil back. If they take back power from us, we will take back our oil. Let us fight this last fight and I tell you the Devil is a liar.”


Addressing the audience, a leader of the militant, popularly known as Boyloaf boasted that nobody or group of persons had the monopoly of violence, saying the only thing binding Nigeria’s unity is Niger Delta.

He believed that President Jonathan would win the February 14 election, but however noted that if the North out of desperation for power took power from their kinsman, the people of the Niger Delta would take their oil back.


The ex-warlord said, “We are Nigerians but not one Nigeria; what brings us together is oil. The North wants to use insecurity excuse to push out our own."

On his part, another militant leader, Mujahid Dokubo-Asari lamented the alleged intimidation being meted out to the people of Ijaw stock in Nigeria, saying the people could not take it anymore.

He said, “For every Goliath, God created a David. For every Pharoah, there is a Moses. We are going to war. Everyone of you should go and fortify yourself," he said.