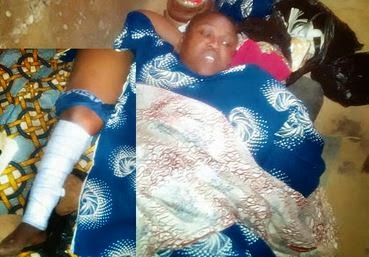 A 65 years old woman popularly called ‘Iya Oyo’ has been hospitalized having been attacked by two rams in Ado Ekiti, a development that led to the arrest of the rams by the police.The strange rams are said to be owned by a manager of a filling station at Okesa area of the state capital

The embattled woman who was accompanied by his son at the time of attack on Monday was about going to a bank to withdraw some money when she was attacked by the rams.On sighting the woman, the rams were said to have allegedly gone wild and gored her on the right thigh.

Speaking with newsmen at the hospital, Iya Oyo disclosed that shortly after she was hit by the rams she fell down and ‘passed out’ immediately only to find herself at the clinic after coming back to life.

“On the fateful day, I was going to the Union Bank with my son. We were walking on the walkway and we saw the rams in front of us but not knowing what was on their mind.

“But immediately they sighted us coming closer to them, one of the rams rushed towards me and hit me several times with its horns. “Immediately, I fell down. But as I was struggling to get up, the second ram joined the first to attack me, thank God that some people came to my rescue and saved me from untimely death in the hands of these “mad rams.”