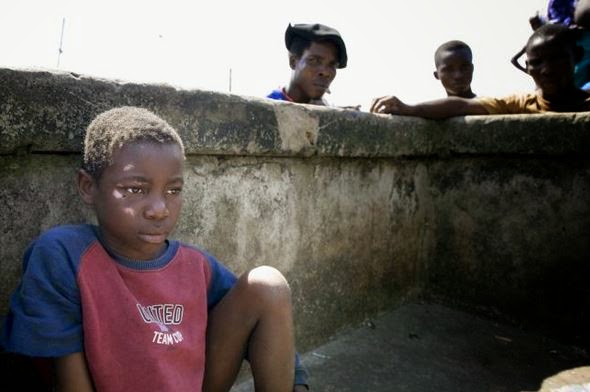 There was a pandemonium in Ebebit commu­nity of Ekim/Uyi Clan in Odukpani Local Government Area of Cross River State after three minors confessed how they masterminded the killing of their grandmother Mrs. Nkoyo Asuquo through witchcraft.

The late Mrs Asuquo died in mysterious circumstances on June 5, 2014.

The kid witches named other members of the family that are on their death list awaiting to be killed and also named some other family members that influenced them to present their grand-mother for their meat eating spree in the coven. lol
Their confessions caused uproar in the community as some angry youths almost lynched the mentioned family members that instrumented the presentation of the Mrs. Asuquo but the village head Chief Okon Asu­quo Asuquo stopped them.

An eyewitness told DailySun that the concealed skeleton in the cupboard was brought to light fol­lowing a statement from one of the children, who accused his two brothers of killing the elderly woman even when he advised against it as they would not have anybody to feed them anymore.

“It all started in the early hours of Saturday, June 7, 2014. One of the three grand-children, Edem woke up and was said to be hungry and he then called the other two and asked them that now that he was hungry, who would he cry to.

“He told them that this was one of the reasons he ad­vised that their grand-mother should not be killed but they refused to listen to him. For that, he said he was going to expose the matter to other family members, which he did,” the witness said.

The source said the mat­ter was reported to the vil­lage head, Chief Okon Asuquo , who later invited the children to his house for interrogation, adding that at the meeting, the children recounted how they killed their grandmother and that one of their uncles, Nathan­iel and their aunty, Arit, had been penciled down for kill­ing. Based on their confession, Chief Asuquo was said to have urged them to return to their coven and rescue their uncle and aunty.

But another round of trouble started shortly after they went back to the vil­lage head to announce that they had to set free the two persons but were stopped by eight other members of the family who were also said to be witches.

Consequently, the village head referred the matter to the clan head of Ekim/Uyi clan, Etinyin Ekeng Nyong, who invited them to appear before him next week.