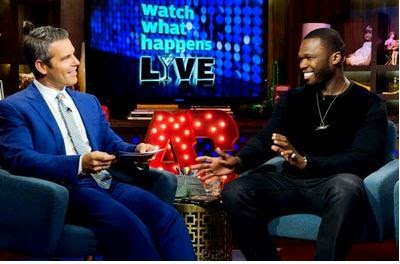 US rapper 50 Cent tells it all in new interview Andy Cohen Live show after he was invite to play Plead the Fifth on Wednesday, June 18..

Cohen asked the rapper 50 cent what it was like to be yelled at in the face by Beyonce (noted for her bad breath), after his recent revelation about his confrontation with Queen Bey at the Cosmopolitan in Las Vegas on New Year’s Eve.

"It's not really bad, like her breath doesn't smell," the 38-year-old rapper responded, coolly. "But it's one of those things, like the paparazzi were taking pictures of us at the same time, so there's not really a right way to respond.


"It's like if you're in an elevator and you're attacked, you can't do nothing,” he added, taking a cheeky dig at Jay Z, after his elevator brawl with Solange Knowles.

Cohen asked the rapper how he felt when he had sex with Kim Kardashian.


"I never....," 50 Cent replied, insisting reports of a hookup were false. "We took pictures with each other in Australia at the 2008 MTV Awards and I posed the picture," he insisted.

Who is the most overrated Hip Hop star of all time?


"I mean Jay Z," 50 Cent answered without hesitation. "He would say he was overrated. Rather be overrated than underpaid."