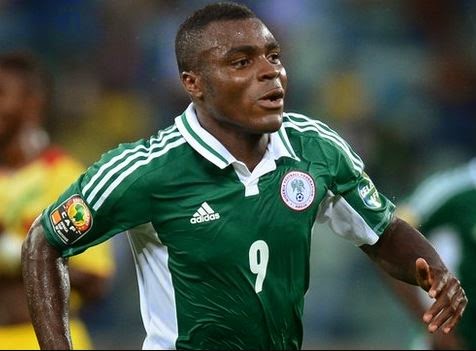 Chelsea are hoping to wrap up a quick-fire deal for Fenerbahce striker Emmanuel Emenike after making a £16million bid for his services.

Nigerian national team and Fenerbahce striker Emmanuel Emenike aka 'the bull' has revealed his dream of playing in the English premier league but now it seems his dream will come to pass sooner than he thought.

Turkish newspaper Fanatik reports that Blues manager Jose Mourinho is a big fan of the forward, and decided to slap in the offer this week after watching him at the World Cup in Brazil.

Emenike has helped the Nigeria team reach the knockout stages of the tournament, on the back of an excellent season at Fenerbahce, where he scored 12 goals and picked up nine assists.

The 27-year-old only moved to Turkey last summer from Spartak Moscow in a £10million deal, but Fenerbahce are happy to make a quick profit on him.

Nigeria v Bosnia-Herzegovina: Group F - 2014 FIFA World Cup Brazil
Emenike is currently at the World Cup in Brazil
Emenike admitted recently he is desperate to move to the Premier League in the future, and a transfer could now be concluded quickly.

‘I have always dreamed of playing in England,’ he said.

‘If I get the opportunity to play in England – I wouldn’t turn it down.’

Chelsea are planning to overhaul their striker options with Diego Costa set to arrive from Atletico Madrid, while Romelu Lukaku, Fernando Torres and Demba Ba could all depart.