Female kidnapper strangles and ties her neighbour's 6-year-old son, locks him inside a box [PHOTO] 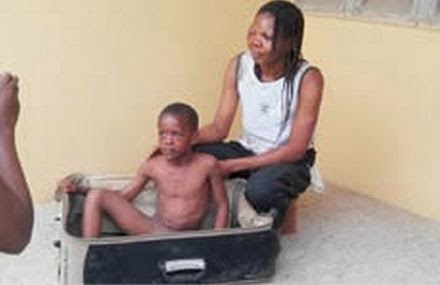 A six year old boy Emmanuel Emeka, was rescued from her female abductor yesterday in Ikorodu, Lagos after their neighbour (a lady) lured and tied him up.

Emmanuel said their neighbour identified as mama Ifunanya called him into her room then strangled him and forced clothes into his mouth so that he won't be able to scream out before tying him up.
Read Emmanuel words below...

“I wanted to draw water and take my bath before going to school when she told me to come. I went because I know her; she is Mama Ifunnaya. But when I got to her side, she threw me inside her room… she closed her net. She then tied me and put me inside a box.I wanted to shout, but I could not shout properly. I heard my mummy’s voice when she was looking for me, but I could not shout. She (pointing to the suspect) is a wicked person.”

Our correspondent observed that Emmanuel’s neck had marks, while his eyes were bloodshot.PUNCH Metro on Thursday spoke with the victim’s mother, Mrs. Gloria Emeka, who explained that she never suspected her neighbour because while she was searching for her child, the suspect was in her room with her children praying and shouting “holy ghost fire.”She said she later discovered it was a ploy to prevent her from hearing Emmanuel’s screams.She said,

“On Tuesday morning, I was preparing Emmanuel to go to school. He told me he wanted to fetch the water from the well.I left him and went inside the kitchen where I was cooking. But what I heard next was the muffled voice of my child and I ran out.I began shouting his name, but I didn’t see him. I, however, observed that my neighbour’s door was slightly opened and I entered. I met her children and asked them if they saw Emmanuel, but they said no.I looked everywhere without a trace of my son. People joined me and we searched the surroundings, but we couldn’t find him.My landlady’s son entered the well to see if he fell into the well, but he came out and said he couldn’t find anything.”

While this was on, Mama Ifunaya was said to have sent her four kids out of the house.

“Later, we saw her leaving the house with a box on her head. She said she was travelling. It was my landlady that challenged her why she could go out when everybody was busy searching for Emmanuel.

“The landlady asked her to stop, but she suddenly increased her pace and started running. That was how the landlady shouted, ‘kidnapper, kidnapper’, and people ran after her.”

The box was said to have fallen, and when it was opened, the missing boy was found in it.

Our correspondent learnt that a mob would have lynched her but for the intervention of policemen from the Ipakodo Police Division, Ikorodu.

She reportedly confessed that a prophet sent her to bring the child.

A police source told our correspondent some witnesses said more than 15 receipts were recovered from the victim. The receipts were said to have shown payment for some past unidentified jobs.