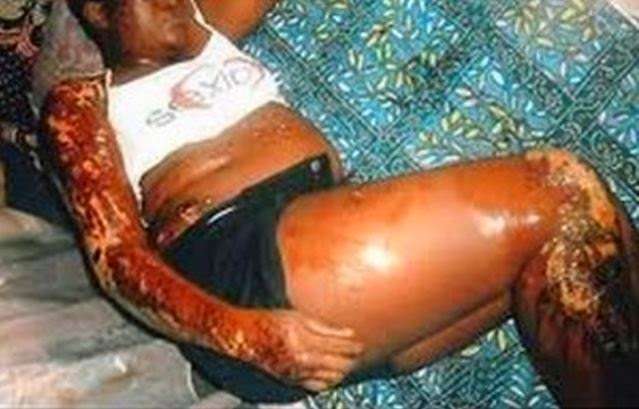 Biology showed us that it is only the man that produces the Y-gene which is the gene responsible for a male child. But yet some men fail to understand this and blame their wives for not giving birth to male children.

A middle aged woman, Mrs. Monica Nwakpuke, escaped death after her husband, Paul, allegedly hired assassins to set fire on her body so that she would burn to death for giving birth to only female children for him instead of a male child.


The culprit, Paul (a patent medicine dealer) hails from Ebonyi State allegedly hired assassins to murder his wife. The assassins then trailed the woman to her father's house refuge over the lingering problem of male child saga in her husband's house with the purported plan by her husband to eliminating her.

“Three men laid ambush for Monica in the night waiting for her when she came out to use the toilet and when she eventually came out that night, the attackers rushed and grabbed her while one of them slapped her repeatedly on her face before forcing her onto a standby motorcycle and sped off.”

The attackers poured fuel on her body, then set her on fire and flee the scene but as God may have it, she was rescued and rushed to the  Federal Teaching Hospital, Abakaliki where she is said to be battling to stay alive.

1) how long has she been out of her Her Husband's House prior to this incident. 2) Did she recognize any of the alleged abductors or Assassinates. 3) is anyone of them in Police custody. 4) was the husband still keeping in connection with her while she was at her father's house?.by default he will be a prime suspect. and as it stands until proven hence the husband remain a suspect not guilty until proven otherwise. Justice must take a course. we must be careful before we judge. Consider also that there is a possibility she has gotten entangled with some new relationship while at her father place and when more is expected of her she is turning around to confess her love to her husband and this can provoke the other partner to this evil as well. all options must be set on the table.

That man is very heartless.. Female no be person... #Joefirst