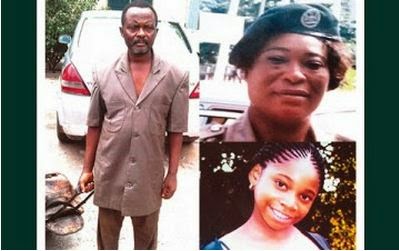 Police in Lagos yesterday paraded a 64-year-old native doctor, Alhaji Olatunji Azeez, who allegedly confessed to the killing of a retired customs officer Mrs. Angela Kerry and her 10-year-old foster daughter, Obiagulum, on May 10, 2014.

Alhaji Azeez, a native of Oyo State has three wives and five children.

Azeez confessed that he was forced to kill Mrs. Angela and her daughter after she threatened to kill him over a sum of money.


He explained: “I have been a trado-medical doctor for about 30 years, but I knew Angela over five years ago. She initially came to me for protection from family attacks. One of her friends called Lizzy introduced her to me. The relationship began to grow, and she kept patronising me for one thing or the other.

“Then, about three years ago, she mentioned her bareness problem, adding that the daughter that was with her was adopted. I was shocked. But when she told me her age, I told her it was impossible to make her pregnant. But she insisted that prophets in the churches she went had assured her she would get pregnant...

According to Punch, Azeez later lied to the woman that she would get pregnant and collected N9m from her for the job.

Azeez said, “I did the normal concoction for her, but it didn’t work because of her age. But I collected the money because I knew if I did not, she would go to where they would collect it. After some months without result, she came to my place to complain. She then demanded a refund, but I told her that I could not repay it.

"She then began to threaten me. Within a month, I tried to repay N2.5m. On that fateful week, she came back for the remaining N6.5m. It was Saturday, May 17. She came with her daughter and insisted that she wanted her balance. She said as a retired customs officer, she could kill me if I didn’t pay back the money. Then I thought, I must kill this woman before she killed me. The hole at the back of my house was not built for killing. It was dug for drainage during rainfalls.”

Azeez confessed that he went to the backyard, covered the hole with a white cloth that Angela normally saw in another shrine in his house.

He said, “After we talked, we moved with her daughter to the place. I said she should kneel down on the mat with her daughter. She did so and fell into the pit with her daughter. The operation was successful because no member of my family was around in the house. I then began to cover the pit up with sand. I poured in roughly 50 buckets of sand. The following day, I got two bricklayers to cement the portion. But I had first taken out the belongings she brought.”

Lagos State Commissioner of Police, Umar Manko, stated that the police had concluded their investigations on the case, adding that the native doctor was going to be charged to court for murder.

He said, “The woman and her daughter were reported missing on May 10 at the Oko Oba Police Division by the family.

“Azeez was eventually arrested through a tracking device installed on the victim’s Toyota Camry. Azeez, an herbalist, had hypnotized the woman for a long time. He had taken over N200m from her both in cash and property. We discovered he cleverly constructed a well in his house, lured the woman with her daughter into the room, and buried them alive.

“We were able to recover the decomposed bodies of the victims from the well. We also picked their property which was buried along with them. We have finished our investigations, and he will be charged to court for murder. We will leave the rest to be decided by the court.”