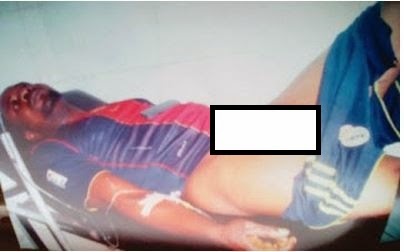 A tenant in Lagos, Yinka Offehin, 35, is presently admitted at a private hospital in Lagos State battling to stay alive after his landlady's children cut off his scrotum.

Offehin is an Edo State indigene who resides on Popoola Street, off Abaranje Road in the Ikotun area of Lagos, was reportedly attacked by his so-called landlady's children while sleeping in his room with his family members.

His wife, Bisi, who witnessed the incident identified the assailants as Solomon and Damilola, the children of the landlady.
She said, “On Thursday morning, around 3am, while we were sleeping, we heard loud bangs on our door. We initially thought they were armed robbers because the house beside ours had recently been robbed.“When they entered, we saw they were children of our landlady. They began destroying our electronics and other property.

“There were two of them. One held a knife in his hand. They took N800, 000. They descended on my husband and he also fought back. In that confusion, my husband shouted and we saw that one of the attackers had cut Yinka’s scrotum. I can’t say what they used to cut off my husband’s scrotum.”

She added that her husband, though in pain, was able to hold on to one of his attackers till dawn, while the other fled the scene.

Bisi said her husband could not be admitted at a general hospital because of the ongoing doctors’ strike, but was eventually taken to a private hospital in the area.

When our correspondent visited the victim at the hospital, he told Punch the genesis of his problem was when he had a misunderstanding with his landlady and was asked to vacate his apartment.

“I was asked to leave the house immediately, but after the intervention of the traditional ruler of the community, I was asked to leave by the end of August.But that decision did not go down well with the children of my landlady and they continued to make trouble with me.I was already planning to leave their house and had even contacted an agent when they attacked me without any provocation. I want the government to fight for me,”

A doctor in the hospital, who pleaded anonymity, told our correspondent that his patient would need up to three months to recover.

“We have stitched the area where the scrotum was torn. It may take up to three months before it will eal. He needs time to fully recover from the injury.”

A relative said the doctor told the family if the condition did not improve, a surgery may not be ruled out.

It was learnt that about N60, 000 had already been spent by the family.

The father of the suspects, a pastor, when contacted, declined comment.He said,

“I am sorry; I can’t speak with you on this matter. You know the matter is already with the police and those they accused of committing the offence are in the police cell. So, what do you want me to say? I was told they are taking the matter to court. Let’s leave everything to God.”

Our correspondent learnt that the case was reported at the Ikotun Police Division.

A source told our correspondent that a member of the suspects’ family had on the morning of the incident reported a case of armed attack on them by a tenant.

The wife of the victim, who met the relative at the station, reportedly expressed surprise, telling the officers the reverse was the case.

It was learnt that the relative was put behind the counter after the police saw the victim’s injuries.

It was around 3am, while the victim was sleeping in his room, that one Solomon Olowogbemi and Damilola Olayeye, the children of his landlady, came in and started fighting with him.In the process, they inflicted injury on him with an unknown object. The skin of his scrotum was partly cut off, thereby exposing one of his testicles. The two suspects have been arrested and detained and the victim taken to a hospital.”