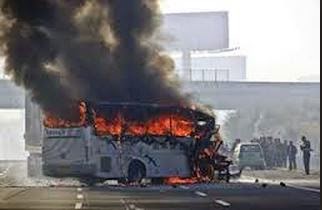 Sixty students of the Enugu State University of Science and Technology (ESUT), miraculously escaped death on Thursday, after a shuttle bus mysterious went on fire.

Although there were no deaths, many of the students and other passengers sustained serious injuries in the near stampede that resulted while escaping to safety through the widows and other exit available spaces in the bus.


Valuables including Laptops and handsets belonging to the students were also completely destroyed by the fire.

According to reports, the timely alert by detached policemen from Independence Layout, Enugu, saved the lives of the students.

One of the survivors, Vivian, narrated how the security operatives suddenly stopped the driver, raising the
alarm that fire was oozing out from the vehicle.

“We were saved by God through the policemen who were coming behind us. They stopped our vehicle and shouted to us to come down quickly. We jumped out. I thank God nobody died in the inferno,” she said.
Another survivor, Ebere Okechi said “I lost my Nokia phone, all the passengers inside the vehicle did not know that the shuttle bus was burning,  outsiders were shouting fire, fire before we started jumping out from the bus.”

Confirming the incident, the coordinator of the Coal City Shuttle Bus, Nnaemeka Ojibe, said the fire was caused by faulty battery.