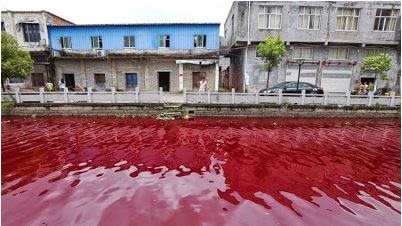 People in Zhejiang province of China said the river looked normal 24th of July at about 5 a.m Beijing time. Within one hour, the entire river turned crimson. Eyewitness also said they started percieving a strange smell around the area.

“The really weird thing is that we have been able to catch fish because the water is normally so clear,” one local villager commented on China’s microblogging site Weibo.


Inspectors from the Wenzhou Environmental Protection Bureau said they still don't know the cause of the incident, although water samples indicated that the suspicious color was a result of illegal dumping in the river.

“We suspect that somebody dumped artificial coloring in the water because he thought the typhoon yesterday would cause heavy rain, and nobody would notice [the color],” Jianfeng Xiao, Chief of the bureau told China News.

“It turned out there wasn’t heavy rainfall yesterday, so the evidence is left behind,” Xiao said.

Xiao said there is a paper manufacturer, a food coloring company and clothing-maker a long the river. The bureau is still investigating the incident. [abcnews] 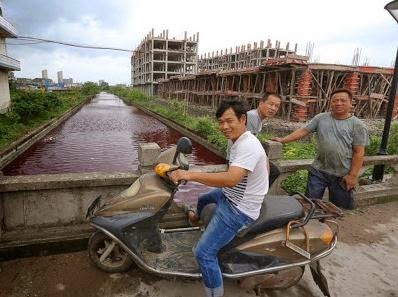