Home Gossip News Deadly Ebola virus is now in Lagos, Nigeria; See how you can prevent it

Deadly Ebola virus is now in Lagos, Nigeria; See how you can prevent it 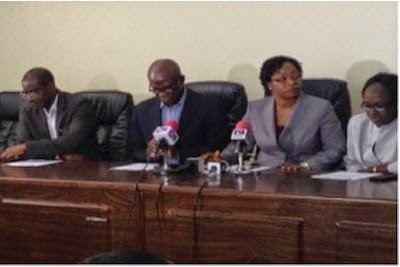 Please we should all be very careful as authorities in Lagos have confirmed Ebola virus in the state. Note that Ebola virus has no cure and no vaccines. It kills faster than any other disease at the moment making it far worse than HIV/AIDS.


Lagos State Government is currently investigating a possible case of Ebola Virus in the state while treatment is on for a 40 year old Liberian, who is now a suspect, and a possible 30 others who may have had contact.


Dr Yewande Adeshina who is the Special Adviser to the Lagos State Governor on Public Health, in a briefing noted that the 40 year old Liberian is in an isolated place at a private hospital in the Obalende area of the State.
Dr Adeshina also noted that the hospital housing the Liberian has been cordoned off and the victim isolated.

She warned residents to “keep personal and environmental hygiene” and urged those who notice “strange feeling or symptoms similar to those of Ebola virus, which ranges from fever, headache, diarrhea, nausea, vomiting, sore throat and joint pains, which are all symptoms of other ailments, to visit competent health facilities”.
In the absence of such facilities, she said residents should call the following numbers 08023169485, 08033086660, 08033065303, 08055281442, 08055329229.

The State government had earlier in July laid out some precautionary measures to stop the outbreak of the disease, that has ravaged neighbouring west African countries, in the state.