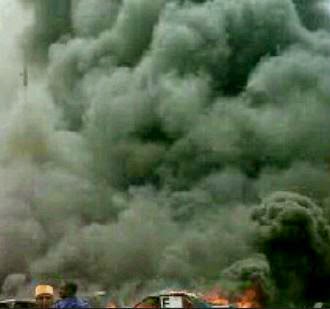 According to a statement released by the Nigerian Police;
A suicide bomber suspected to be a female had slipped into the crowd of citizens buying kerosene at the Station before detonating the explosives. The suicide bomber and three others have been confirmed dead, eight persons are injured and rushed to the Hospital. It is instructive to note that the Mega Station did not go ablaze due to the security barricade put in place by the Policemen on duty at the station. Such a situation would have clearly complicated the Emergency response.

Security Forces have cordoned off the scene, and Police Bomb Disposal Experts are "sweeping" the area. Citizens are advised to stay off the scene, be vigilant and report any suspicious person(s) or activities to security forces. Full scale investigation has commenced, intensive patrol of the city is ongoing.

What can put an end to this mess? Please share your though.