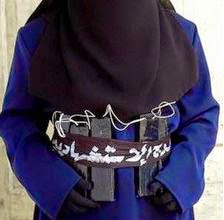 According to SaharaReporters:
The Nigeria police revealed that a lone female suicide bomber died in an attempt to bomb, Northwest University in Kano around 1pm Nigerian time.

The female believed to be a 16 years of age, was walking suspiciously towards the school gate when the policemen guarding the area spotted her, isolated her and called for reinforcement from female police officers adept at handling Muslim females.

The young woman who had a bomb concealed inside her hijab, killed herself by detonating her explosives, five policemen suffered minor injuries.