Home Gossip News “I enjoy Killing people...If you release me, I will still Kill ” - Sadiq Ogwuche

“I enjoy Killing people...If you release me, I will still Kill ” - Sadiq Ogwuche 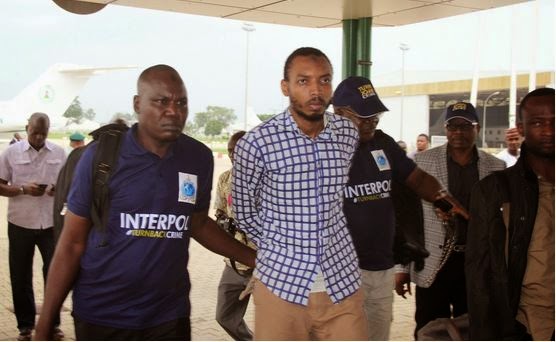 Sadiq Ogwuche is not showing any remorse for masterminding Nyanya, Abuja motor park bomb blast during interrogation at State Security Service (SSS) Headquarters in Abuja. Ogwuche said he enjoys killing people that even if they release him today, he will still kill more people. I think he should just be executed after interrogation.

Aminu Sadiq Ogwuche who was recently extradited from Sudan, has began with stunning observation at State Security Service (SSS) Headquarters in Abuja. Contrary to the expectation of interrogation officers that Ogwuche will become sober as a result of his crime that left 70 people dead and 120 injured.

But instead he gave them a shocker with his words. The terrorist suspect who was so fluent in English said to the Security operative officer:

“I don't deny that I am the executioner of the Nyanya bomb incident. I did it in order to draw government's attention to our demands. We want our detained colleagues released and compensation paid to those of our colleagues who were killed by the federal troops during operations. We want Islamic rule in the whole of northern Nigeria. Western education is a sin against Allah. It's time for dialogue between government and Boko Haram leaders for the way out of the deadlock,”

“The government must do something now or the bombing will continue. There is no regretting anything because we are fighting a just cause to liberate our people from western education and religion,”

Ogwuche vowed not to forgive the federal government for waging war against Islamic fundamentalists in the country saying that Boko Haram highest echelon is prepared to contain government determined onslaught against terrorists.

“Federal government has been trying without success to wipe out Boko Haram. They killed our leader, Muhammed Yusuf and hundreds of others yet we still exist. We are a force to be recognized. You ignore us at your own peril. We are particularly pained by the killing of hundreds of our members across the forest in northern part of the country. Although we equally killed federal troops, we will never forgive the federal government for the incessant killings. We are well armed to fight back and we will never surrender. Boko Haram is well funded and highly equipped organization with capacity to take over the whole country if it so desires,”

During his preliminary interrogation recently, Ogwuche was said to have disclosed that he specialized in assuming any character he wishes to assume.

“I can become anything in other to hide my true identity. That is part of our training. While in Sudan, I camouflaged as a student to evade the security. I was surprised that they got me at last. I received part of my training in Somalia because there are so many knowledgeable foreign and local terrorist agents there. It is the same in Sudan but the difference is that in Somalia, you have a lot of caves to hide from security agents. I use to go to Somalia in order to meet other terrorists there,” Ogwuche added