NDLEA arrest Nnewi businessman caught with 11.06kg of drugs on his way to China [PICTURED] 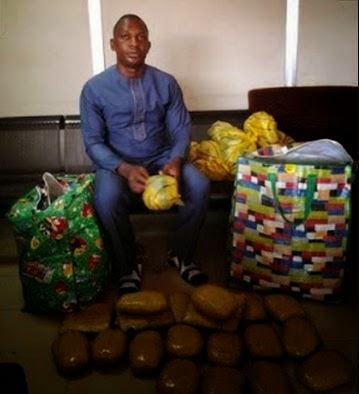 A 39-year old motorcycle parts dealer, Ogbodo Chibuzor David has been arrested by the National Drug Law Enforcement Agency (NDLEA) for trying to smuggle 11.06kg of dried Indian-hemp that tested positive to cannabis to China.

The suspect, David who hid the drugs in various food items was arrested after cannabis was discovered inside his bags at the Murtala Muhammed International Airport, Lagos when he was about to board a Qatar Airline flight.
David who sells motorcycle parts at Nnewi market pleaded that he decided to smuggle drugs because his business collapsed after someone duped him.

“I gave a business partner the sum of 30,000 dollars to supply me goods and he disappeared. That brought my business to its knees and I have been struggling to take care of my wife and child since a year ago.

“I met many people for financial assistance but nobody was willing to help until I was wrongly advised. A friend told me to smuggle cannabis to China,” Ogbodo stated.

The NDLEA commander at the airport, Mr. Hamza Umar said the suspect would soon be charged to court.