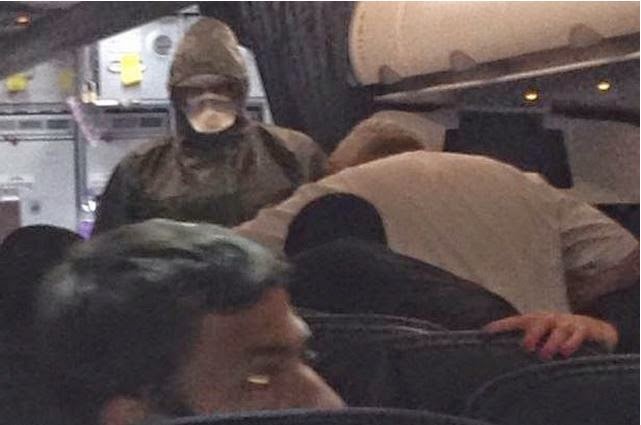 Nowadays if anyone is having a mere headache, people classify it as Ebola....Passengers on a British Airways flight from London were kept on the aircraft for over two hours after a young African girl complained of feeling unwell on the flight. They were force to land after a 10-year-old girl, supposedly from Nigeria, during the flight was seriously ill and was possibly infected with the deadly Ebola virus.

Airline passengers in Scotland were at the centre of an Ebola scare after their plane was quarantined at Aberdeen airport. Passengers on a British Airways flight from London were kept on the aircraft for over two hours after a 10-year-old girl, believed to be of Nigerian descent, was "violently sick" on-board the BA1314 service.

Environmental Health and trained infectious diseases medics immediately quarantined the aircraft until the sick passenger could be safely removed. It's understood the girl travelled from infected regions in Africa.

photo(above)shows medics in chemical suits board the plane while anxious passengers watched on in horror. One man, whose pregnant daughter was on the flight, said:

"We tried to get information but nobody was returning our calls. "The passengers weren't being told anything other than the girl was sick and quarantine measures were put in place."

He said the experience was stressful for the passengers and staff on the flight. The girl was later transferred to the infectious diseases unit at Aberdeen Royal Infirmary where further tests will be carried out.