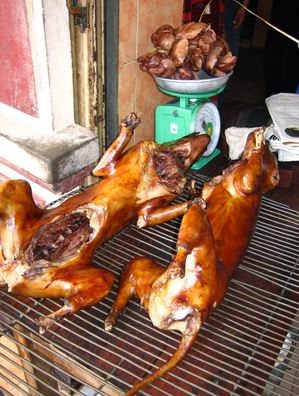 According to VanguardNG,  Five persons, a man and two of his children and two others were confirmed dead on Friday  in the village of Uchenyim , Wanikade, North Ukelle in northern Cross River State after eating the meat of a dog.

Reports from the area said the dog was fond of eating the eggs laid by native chicken in the Odareko-Uchenyim village and one of the villagers allegedly laced the eggs laid by his chicken with gamalin 20 insecticide  and as expected, “the dog ate the eggs and fell ill and when it was about to die the owner quickly killed and prepared it into a delicacy which he, his family consumed and some neigbours consumed ” Ugbem Onawo, a villager narrated to Vanguard.

The man and his two children and the two others who died, according to the report also ate the intestines of the dog where incidentally the poison from the gamalin 20 is lodged leading to their taking ill and dying . “After the man shared the intestines among his children and the two neighbours and they ate death came calling and they all died though at different times ”. Our source said

Onawo said they were rushed to the local health centre for medical attention  but were confirmed dead on arrival at the health centre. “A feeling of grieve has descended on the entire village and people are deeply saddened by what took place as such a tragedy has not befallen them before”
Hon Frank Ugbem, the councilor representing Wanikade Ward at the Yala Local Government Area legislature said the tragedy is painful and that he has sent a delegation to console the bereaved families.
He said all the dead have been buried in accordance within the tradition of the Ukelle people.