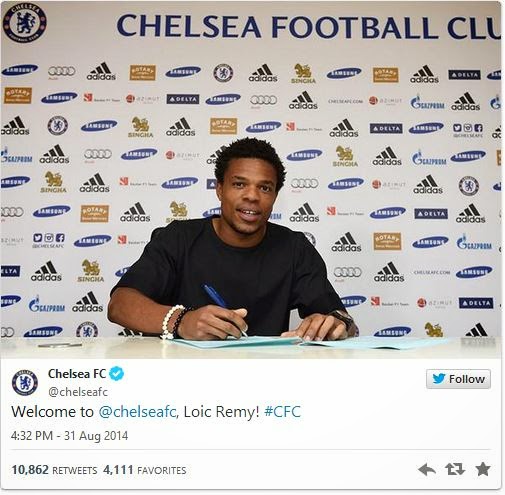 The striker, who was on the verge of joining Liverpool until he failed a medical, has moved to Stamford Bridge in an £8.5m deal that sees him replace Milan-bound Fernando Torres

QPR striker Loic Remy has signed a four-year deal with Chelsea after the west Londoners met his £8.5 million buyout clause.

As revealed by Goal on Friday, the Blues reignited their interest in the France international after reaching a deal to loan Fernando Torres to AC Milan.

Arsenal made a late move to hijack Remy's move to Chelsea, but soon dropped their interest to pave the way for the striker to move to Stamford Bridge.

"I feel very happy and very proud," he told Chelsea's official website. "When I heard Chelsea wanted to sign me I said 'let's go' straight away because they are one of the best clubs in the world.

"I remember the amazing atmosphere at Stamford Bridge when I played there for Marseille and I can't wait to play for the first time in front of my new fans."

Remy came close to joining Liverpool earlier in the summer only for concerns during his medical to prompt the Anfield outfit to back out of the deal, and instead he becomes Chelsea's sixth signing of a busy.

The 27-year-old, who scored 14 Premier League goals while on loan at Newcastle last season, will compete for a place in the starting XI against in-form Diego Costa and Didier Drogba.