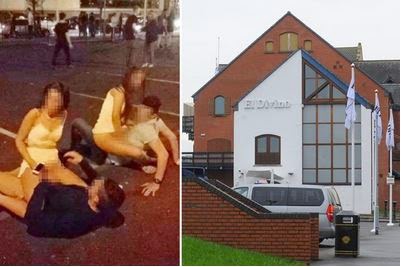 Two men and two women caused a stir after they were seen having séxual pleasure in public outside a popular nightclub. The two couples were pictured doing it on the floor as both men lied down and the two women sat on top of them in a car park outside Ed Divino in Belfast as passers by looked on.

The mind blowing pictures which were taken last week Thursday has gone viral with people posting their disgust online.


One twitter post reads: “WTF is wrong with the young ones did they not learn after magaluf girl n slanegirl now another pic pops up :(.”

Another posted: “People have no shame. This is traumatic.”