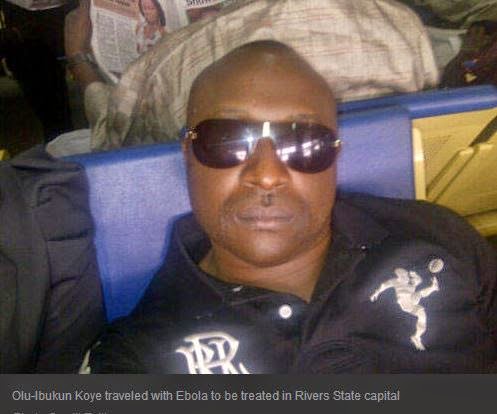 The Nigerian diplomat working for ECOWAS, Olubukun Koye who escaped quarantine facilities in Lagos and left for Port Harcourt after he made contact to late Liberian man, Patrick Sawyer. Because his actions resulted in the death of the doctor (Iyke Enemuo) that treated him and also put the lives of many Nigerians at risk, he may face manslaughter charges.

This is coming on the heels of report that the number of persons under surveillance in the state for Ebola Virus Disease has increased from 100 to 160.

According to Thisday, Sources said that the issue of Koye (a primary contact of the index case, late Liberian Partick Sawyer) who defied instruction not to leave Lagos after being placed in the isolation unit, was discussed at the Federal Executive Committee meeting on Wednesday and that the Minister of Justice and Attorney General of the Federation Mohammed Adoki was directed to look into the Nigerian laws and see how he could be sanctioned for his action that resulted in the death of Enemuo.