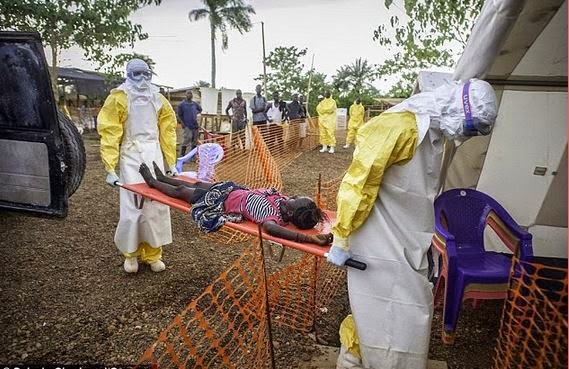 Warning all JointArena.com readers, avoid direct contact with sick people even if it's your loved ones,. Ebola is real.

Just when we were about to start celebrating the defeat of Ebola, another foreigner has caused havoc with the Ebola virus in Nigeria. This calls for more caution as you never know where these people have visited and who they have come in contact with.

The efforts to contain Ebola in Nigeria have suffered a major setback as another medical doctor has been killed by the disease in Port Harcourt, the Rivers State capital.


The doctor’s passage on Friday, the first outside Lagos, caused panic in Rivers State and worry among the health personnel and other stakeholders battling to stamp out the disease in the country.

The doctor's name is Iyke Enemuo, according to Rivers State Government. Doctor Enemuo was said to have contracted the virus from an ECOWAS diplomat whiletreating him of Ebola symptoms in a hotel in the city. But when did people start receiving treatment in hotels? Nawao!

A source in Port Harcourt said: “As it is, there may have been well over 200 contacts of this devilish diplomat who lured his young doctor friend to treat him secretly and went back to Lagos. We have to look at the health workers in the Good Heart Hospital, Sam Steel Clinic, the members of staff of the hotel and its guests, those who travelled with the diplomat in the same vehicle(s) or aircraft from Lagos to Port Harcourt, the late doctor’s family members. The list goes on and on...

It was gathered that Enemuo, before he took ill on Tuesday “operated on a woman on Monday presumably after treating the diplomat.” The medial doctor’s widow, who was quarantined alongside the diplomat, had a three-month-old baby.

The ECOWAS official whose name was not given by government, was said to have had contact with the index case in Nigeria (Patrick Sawyer). He was placed under surveillance in Lagos but he escaped to where he checked into a hotel in Port Harcourt and contacted Doctor Enemuo for treatment.

Surprisingly, the Diplomat recovered from Ebola and returned to Lagos. Health workers were said to have tested him when he came for a clearance certificate and gave him a clean bill of health.

The minister said following a test conducted on the corpse of Enemuo which showed that he died of Ebola, the Health ministry officials placed 70 people who came into contact with him either when he was sick or touched his corpse, under surveillance.

Rivers State Government said “about 100 contacts from a hotel, patients of Dr. Enemuo and patients of the hospital where Enemuo was treated until his demise have been identified and restricted."

A resident of Port Harcourt, said in her Facebook post, that the latest development was a calamity.

“It’s quite a calamity unfolding in Port Harcourt. Unfortunately, the city’s health facilities are not quite ready to contain Ebola at the moment,” she lamented.


The resident said Enemuo, before he took ill on Tuesday, “operated on a woman on Monday presumably after treating the diplomat.”

She wrote, “He (Enemuo) fell ill next day Tuesday and died last Friday. No one knew about the hotel angle which was a very big risk he took…and unethical thing to do.

“He was ill for three days and then started vomiting blood. He was first rushed to one hospital where he was rejected and then taken to Good Heart Hospital whose owner is a Cardiologist and a consultant physician with the University of Port Harcourt Teaching Hospital . He died there.

“The doctor that died practises in East West Road, Rumuokoro…Sam Steel clinic. The wife, also a doctor, has a three-month-old baby.

The resident ,who is an educationist, added that what played out in this latest development was what she called the “Ostrich mentality of our people.”

She said, “My own take is what is with the foolishness of people who suspect they have Ebola not wanting to subject themselves to straight testing. Don’t they know quick detection could save their lives and those of others?”