Ebola virus has been successfully contained in Nigeria 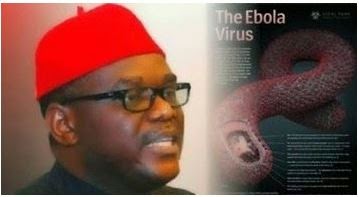 Thank God Almighty. If this news is true and correct then it is something good enough to give God all the praises.

After weeks of fear and apprehension, the FG has announced the containment of the dreaded Ebola Virus. Minister for Health, Prof. Onyebuchi Chukwu made the statement during a media briefing on Tuesday.

Read the full statement Below:

Today is the 38th day since the Ebola Virus Disease was imported into Nigeria by a Liberian-American.

Of these thirteen (13), five (5), including the index case unfortunately did not survive the disease and are now late.

However, seven (7) of the infected persons were successfully managed at the Isolation ward in Lagos and have been discharged home.

Two (2) of treated patients, a male doctor and a female nurse were discharged yesterday evening, 25th August, 2014 having satisfied the criteria for discharge.

As I speak to you, Nigeria has only one confirmed case of Ebola...

A secondary contact of late Mr. Patrick Sawyer’s and spouse of one of the physicians who participated in the management of the index case. She is stable but still on treatment at the Isolation ward in Lagos.

So far, all the reported cases of the EVD in Nigeria have their root in the index case, the late Mr. Patrick Sawyer. This is an indication that, thus far, Nigeria has contained the disease outbreak.

I wish to reassure Nigerians and indeed the global community that the Government shall remain vigilant and will not relent as Government continues to work with her partners to ensure that the disease is kept out of the country.

By Dan Nwomeh, Special Assistant on Media and Communication to the Minister.