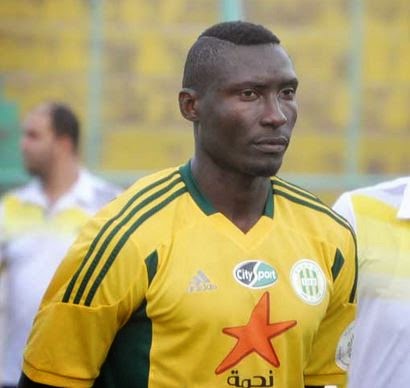 What a sad day for the game of football...A Cameroonian footballer was killed during an Algerian league game after he was struck with an object thrown by a fan.

Albert Ebosse was struck on the head by an object thrown at the end of JS Kabylie’s 2-1 defeat to USM Alger in Tizi Ouzou.

A stone struck the Cameroonian forward, who had scored his side's goal in the game, as he walked towards the tunnel. He was taken to hospital but never recovered.

Kabylie captain Ali Rial revealed that Ebosse died in his arms as he accompanied him to the hospital in the ambulance.

"I'm depressed, it's real drama and I do not know if I'll get over it," he said. "He died in my arms, I still cannot believe we have lost him forever. He was a good man, God rest his soul."

Team-mate Djameleddine Benlamri also spoke of his devastation, stating it was a shame for the entire nation.

"I cannot find the words to express my grief, except that our stadiums are no longer safe for football.

"Worse, they have become cemeteries with the death of Ebosse. It is unthinkable that a player has died because of a defeat. This is a disaster and it is a shame for our country!"

JSK released a statement after the player's death, revealing the incident will be investigated.

"The Ministry of Interior and Local Government, through minister Tayeb Belaiz, has given the instruction to open an investigation into the circumstances surrounding the death of Albert Ebosse," the statement read.

"The JSK player succumbed to a head injury after being hit in the head at the end of the meeting with USM Alger."