In a recent interview with Arise News TV, Australian hostage negotiator, Stephen Davis, who was hired by the Nigerian government some months back to help negotiate with Boko Haram members to facilitate the release of abducted Chibok girls, mentioned the name of former Borno state Governor, Alimodu Sheriff as a sponsor of the terrorist group, Boko Haram. He also said that an unnamed past Chief of Army Staff who was sacked by Pres. Jonathan was also a sponsor of the group.

In the video released yesterday, Davis was very quick to mention the names of the alleged sponsors.

"The first thing to do.. go and arrest former Governor, Sheriff. Former Borno Governor Sheriff who has been funding this for years. He hooks these guys up. He is so frightened that he has switched party to the ruling PDP in the hope that this would give him protection. That guy has really got to go and you know he is enormously corrupt." 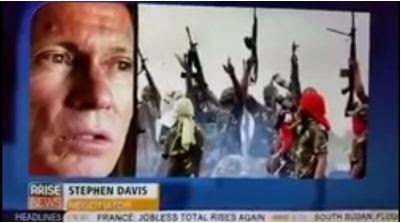 "Why the Economic and Financial Crimes Commission has not yet picked him up is anybody's guess. There is a...the former Chief of Army Staff retired in January but was actually sacked by the President is another sponsor. I would give you the names if you like, I have no fear of this. We are very confident and in fact Boko Haram senior commanders who have been naming them in the interactions I have had with them over many months, confirming what we knew sometime before from other commanders" he said.

After the interview was released, former FCT Minister, Mallam Nasir El Rufai took to his facebook page to say that the unnamed former army Chief is Lt. Gen Ihejirika rtd, the immediate past Chief of Army staff. Below is what El-Rufai posted on his facebook page

"Australian hostage negotiator Stephen Davis has just named Former Borno Governor Ali Modu Sheriff and immediate chief of army staff Lt-Gen Ihejirika (removed in January 2014) as the Boko Haram brains on ARISE NEWS. Davis said Boko Haram commanders that he has been negotiating with as the source of this information. The kingpins not only finance BH operations but select targets for assassination and execution. Finally, the truth about BH is coming out. Hopefully, the murderers of General Muhammadu Shuwa, the abductors of the Chibok girls, those truly responsible for the Nyanya bombings, and attempted assassination of General Buhari and Sheikh Dahiru Bauchi will be known. We hope the authorities will take the steps necessary to act on this revelation, and thereby discharge their duty to protect us, the citizens of Nigeria. That is just what it is, a hope!".

Reacting to the claims against him made by El Rufai, Lt Gen Ihejirika who spoke with Vanguard said he isn't surprised that the allegation is coming from the former minister who he said is the real sponsor of Boko.

"The Commanders including El-Rufai know where the problem is. He should stop deceiving Nigerians by trying to divert attention. When the Boko Haram operation started, supporters of the sect like El Rufai said that there was nothing like Boko Haram and that the Army was just killing innocent youths. If you also remember, not too long ago, some of their supporters including El-Rufai said that I was re-inventing the killing of the Ibos during the Biafra war following government's determination to rid the country of terrorism. The likes of El Rufai started the campaign of human rights abuses in order to divert international attention from the heinous crime being committed by the Boko Haram terrorist. The likes of El Rufai have been supporting Boko Haram. Infact, El Rufai and his likes are the same group of people that ensured the army did not get the requested equipment to deal with the menace once and for all as they used their cohorts to tell the government that procuring modern equipment was unnecessary. At the onset of this crisis, I was the first person to declare that the country was at war but a group of sponsors led by El Rufai disagreed, saying that it was not true. It is the same group of El-Rufai that started the human rights abuses campaign. It was done in order to block any international assistance after the state of emergency was declared and the sect was initially tamed. That gave Boko Haram time and respite to build up again" he said.