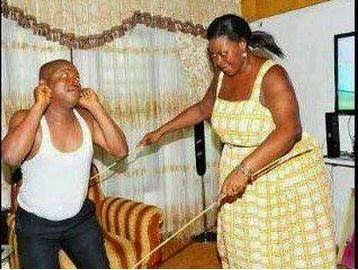 Some marriages these days is all about deceit and serious tension. A woman has appealed to an Ibadan court to dissolve her 8-year-old marriage, because her husband, Lukman Aguntasoolo left her for his first wife.

The woman, Rianat Aguntasoolo, told the Grade C customary court at Agodi-Gate that Lukman does not carry out his responsibilities as the head of the house.

She said, “There is always trouble in our home because we fight nearly everyday. He has abandoned me for his first wife. Lukman doesn’t cater for me and our children. The moment I challenged him for not performing his duties at home he began to accuse me of committing adultery. He would go as far as checking my belongings and spying on me all the time.”

But in his response, Lukman revealed that his wife's children did not belong to him...

He accused her of sleeping around. He claimed that his wife had been involved in an extra marital affairs with an Alfa who rented her an apartment before he met her.

“I later opened a shop for her. I thought Rianat was going to change from her old ways but she rather became worse. She would go out and come home late in the night. Rianat is promiscuous, I don’t want her as my wife any longer,” he said.

Lukman accused her of using diabolic means to marry him, after he allegedly found devilish materials (juju) in her wardrobe which he brought as evidence to the court.

The court concluded that the case between the couple was a complicated one, and called for DNA test to be conducted in order to determine the father of the children.