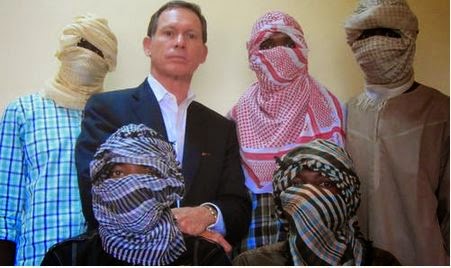 *The detecive has also Exonerated Buhari and El-Rufai

Stephen Davis, an Australian hostage negotiator who spent some time in Nigeria trying to secure the release of more than 200 Nigerian schoolgirls abducted by Boko Haram militants in Chibok, Borno State, told SaharaReporters that he stands by his widely reported allegations that former Governor Modu Sherriff of Borno State and a former Chief of Army staff, General Azubuike Ihejirika (ret.), were among the top sponsors of the Islamist insurgents who have massacred thousands of Nigerians and foreigners and made the northeast part of Nigeria a highly militarized zone.


He also give out a clear warning: “They are now linking with other terrorist group in the region and will soon be very difficult to dismantle. If these political sponsors think they can turn these groups off after the 2015 elections they are going to be surprised to find it is out of their control.”


In an extensive telephone interview with SaharaReporters on Saturday, Dr. Davis also accused an unnamed senior official of the Central Bank of Nigeria as well as a man based in Cairo, Egypt whom he claimed operates as Boko Haram’s bagman. He said both men, in addition to Mr. Sheriff and former General Ihejirika, were major players in the funding and continued existence of the deadly Islamist sect.

Dr. Davis told SaharaReporters that he did not want to name the CBN official as this may prejudice investigation by Nigeria’s security services. Both accused men have reacted furiously to Mr. Davis’ allegation, with the former Borno governor threatening to travel to Australia to sue his accuser while Mr. Ihejirika accused former Minister of the Federal Capital Territory, Nasir El Rufai, of being a “commander” of Boko Haram. Three days ago, Mr. El Rufai had posted transcripts and video of Mr. Davis’ accusations of the former governor and ex-Army chief on social media.

Asked whether Mr. El Rufai and former military ruler, Muhammadu Buhari, had a hand in funding or sponsoring Boko Haram, Dr. Davis said their names have not been mentioned to him by any Boko Haram connections.

Also, asked to explain why Mr. Ihejirika, a non-Muslim who hails from the predominantly Christian southeastern part of Nigeria, became a Boko Haram “sponsor,” Mr. Davis said, “Boko Haram commanders and some connected with them told me on several occasions Ihejirika was one of their sponsors.”

He also disclosed that Mr. Sheriff always had the best military protection in Nigeria’s violence-plagued northeast, a protection he claimed the ex-governor enjoyed after he left office.

Dr. Davis reiterated that his allegations were informed by discussions he had with several Boko Haram field commanders over a long period of time. Asked if President Goodluck Jonathan was aware of the insurgents’ sponsors and their specific roles, Dr. Davis said he was unsure of the extent of information currently before President Jonathan. He added that Mr. Jonathan had been weakened by lack of military loyalty and a history of security negligence. He gave the example of repeated attempts to bring the growth of Al Qa’eda associated cells to the attention of NSA’s since 2006 only to have them dismiss such reports as baseless. “By the time Goodluck Jonathan became president Boko Haram had become a potent weapon with a command structure embedded in 16 northern states fanned by support from corrupt politicians.”

He further gave the example of Nigeria’s Minister of Defense, Aliyu Gusau, whom he accused of basically leaving Mr. Jonathan to carry his can without taking any responsibility for his work.

The Australian negotiator also revealed that his years working with Nigerian presidents on matters of terrorism had shown that, even when some prominent individuals are known to be involved in criminality, the presidents are simply too afraid to take them on. He cited the example of the Niger Delta region. He told SaharaReporters that he and former President Olusegun Obasanjo found out that Abiye Sekibo, who was then Mr. Obasanjo’s Transport Minister, had contracted the assassins who killed a prominent politician, Harry Marshall. He said he tried to persuade Mr. Obasanjo to prosecute Mr. Sekibo, but the then president declined, stating that such a trial could bring down his government.

Dr. Davis touched on several aspects of Boko Haram activities, showing that he was quite knowledgeable about the sect’s actions. He told SaharaReporters that Boko Haram runs about six major camps in the northeast and neighboring countries, adding that 700 fighters inhabited each camp. In addition there are a range of smaller camps within Borno State, which are often temporary and to which kidnapped girls are taken to be used by the insurgents.

The Australian revealed that earlier this year Boko Haram was a loose coalition of three Islamist militant groups that worked with one another, claiming that, since four months ago, the sects had merged into one single entity, become more cohesive, strategically effective and powerful.

On why he had chosen to speak out publicly at this time, Dr. Davis stated that, from experience, any terrorist group that has lasted more than eight years after its formation would likely exist for another 20 or more years before it can be dismantled. It thus becomes embedded for a generation and the likelihood of dismantling it was very low. “If we don’t do our utmost now to dismantle Boko Haram then we may not be able to do so for another generation. That is a very gloomy scenario for Nigeria.”

He touched on former National Security Adviser, Owoye Andrew Azazi, whom he described as utterly corrupt. He said Mr. Azazi, who was a retired Army general, was planning to buy into the Hilton hotel chain in London to the tune of $100 million before he died in a helicopter crash on December 15, 2012.

Dr. Davis painted a portrait of Nigeria’s various intelligence units as operating in silos that refuse to share information that could tame terrorist groups. To illustrate his point, the Australian cited the example of the State Security Services. According to him, months after the SSS won the extradition from the Sudan of Aminu Ogwuche, a suspected terror mastermind who reportedly planned the deadly bombing of an Abuja bus station, the intelligence agency had yet to interrogate Mr. Ogwuche about his links with the three young men he reportedly contracted to carry out the bombing.

Dr. Davis said the young men were three in number and that they lived in the home of a CBN official who also carried out banking transactions for Boko Haram through the CBN. He said two other young collaborators in the Nyanya Motor Park bombing remain on the run.

The Australian hostage negotiator vowed to make more revelations about Boko Haram’s sponsors, adding that he believed the sect could only be dismantled if their sponsors were exposed and prosecuted. In particular, he said he could not see why the Economic and Financial Crimes Commission (EFCC) had not already moved on Sheriff for his extensive looting of public funds when he was the Borno State governor, and for leaving the roads in Borno State in a terrible shape that has enabled Boko Haram to ambush Nigeria troops and massacre them mercilessly. He also added that the former governor should face the ultimate trial for financing the recruitment of young men to the Islamist sect.

Dr. Davis dismissed Ali-Modu Sheriff’s threat to travel to Australia to sue him for his statements as mere grandstanding and seeking to divert attention from the real issue of Sheriff’s involvement with Boko Haram. He added that he would be pleased to meet the former governor at the airport whenever he developed the courage to come to Australia.