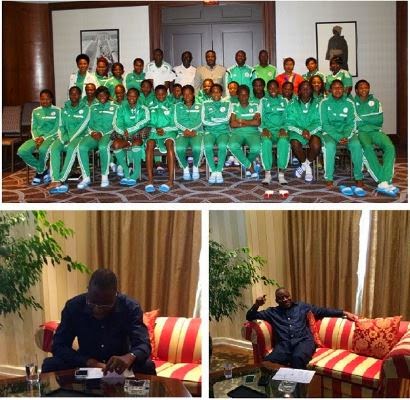 President Goodluck Jonathan has heaped praise on under-20 women’s football national team on their wonderful performance in the world cup. The Falconets are set to go for victory against their German counterparts in tomorrow’s final of the 2014 FIFA under-20 women’s World Cup holding in Canada.

In an audio telephone conversation with the Falconets released to the media by the Special Adviser to the President on Media and Publicity, Reuben Abati,....

President Jonathan who commended the players for getting to the finals of the tournament once again, had however urged them to do their best in exceeding their second place finish in 2010 by over-running the German team tomorrow.Saying that such feat will not only bring greater glory but pride and joy to soccer-loving Nigerians. He said

President Jonathan who is currently on a private visit to Germany called the Falconets at their base in Montreal at about 1515 Hours Nigerian Time .


“You have done very well by getting to the final. I urge you to crown your efforts with ultimate victory tomorrow by playing with the greatest possible artistry, discipline, determination and patriotic zeal.I look forward to receiving you at the Presidential Villa with the winners’ trophy and you can be assured of the immense gratitude of the Federal Government and the very appreciative people of Nigeria,” President Jonathan told the girls and their handlers.

The President had in the same vein assured the Falconets that he will stay up to join millions of other cheering Nigerians in company of his aides to watch the match despite the time difference between Montreal, Canada and Germany where he is on a private visit.