11 drown as bus plunges into river in Akwa Ibom State 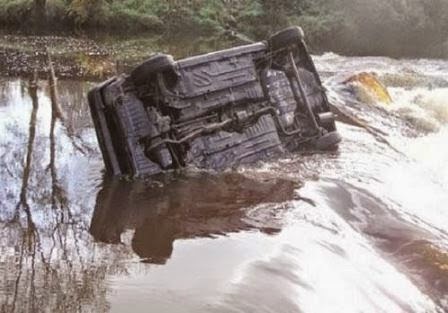 11 passengers, including a mother and her two female children,died in Abak local government area of Akwa Ibom State when a bus conveying passengers from Port Harcourt to Uyo, plunged in river near the Nigerian Army Barracks, Ibagwa.

All, except two of the occupants drowned.It was gathered that the Toyota Hiace bus belonging to To & Fro Transport Company was hit by a Sport Utility Vehicle (SUV) making it to plunged into the river.

Witnesses told The Nation that the SUV was on top speed and its driver was apparently trying to avoid a bad spot leading to its collision with the bus.

On realizing the calamity he caused, the driver abandoned his vehicle and took to his heels while the helpless onlookers could do nothing about the bus which had sunk immediately it fell off the bridge.

It was not until Friday afternoon that the state police command in conjunction with the Federal Road Safety Corps (FRSC) went with a crane from the construction giant, Julius Berger to haul out the vehicle with all the dead.