Husband attacked his Wife with Acid in Abuja 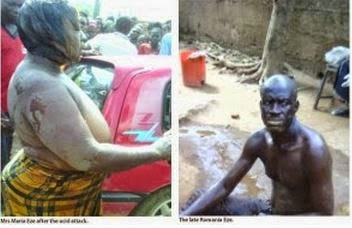 Abuja was penultimate week hit with the horrific story of a man who poured a substance suspected to be acid on his wife and himself after a heated argument. Leadership's David Aduge-Ani who has been following the event writes on new developments since the sad incident occurred.

Going back to the University of Abuja Teaching Hospital, Gwagwalada-Abuja to visit the latest victim of an acid attack was not easy. Not because one was not sympathetic but because one couldn’t be sure of what to expect on getting there.

However, it was unavoidable and necessary for two reasons:

First to show sympathy to the victim and give some sort of support. Secondly, to hear what could have really transpired; what would have driven a man to harm his wife, and himself, that way.

The strangeness of what man can do in a rage has always been baffling; unimaginable things have happened from maiming to killing in the name of anger. The story of Romania and Maria Eze is not different.

On reaching the hospital, it was revealed that Mr Romania Eze had died on Thursday, the day after the incident while the wife, Maria Eze who had been unconscious since the incident has been taken to her hometown in Enugu State. The couple both hailed from Udenu local government area of Enugu State.

Making further enquiries over Maria’s condition, LEADERSHIP learnt that she had not opened her eyes since the incident while it was speculated that the acid bath may have damaged her eyes. This is in addition to the burns on her head, face and other parts of her upper body.

Penultimate Wednesday, the middle-aged man who before the incident lived with his wife in Gwagwa, Abuja Municipal Area Council (AMAC), was reported to have poured a liquid substance suspected to be acid on his wife and later poured some on himself, inflicting severe burns on both of them.

It was gathered that the couple had been living happily with each other as they both owned a shop in the area where they sell bambara nut in bags. The couple had embarked on storage of the produce early in the year so as to have bountiful sales, especially in the yuletide season. They had gone as far as borrowing from individuals and groups to support their plans.

Trouble started between the couple when Romania noticed that the number of bags of the commodity did not match the number he anticipated. It was at that point that he began to enquire and discovered that his wife had allegedly been wittingly hiding parts of the sales from the investment in her private account.

According to neighbours, the late Romania suspected Maria of sending the money she made from business deals to her younger brother to keep, a development that angered him. One of the neighbours also told LEADERSHIP that Maria had allegedly been using part of the money to build a house in her hometown without her husband’s knowledge.

The couple are blessed with eight children; three of whom are married, one son currently an undergraduate of one of the universities in the country and four in secondary school.

However, due to the alleged negative lifestyle of the wife, the husband was reported to have gone bankrupt. Many of his creditors had been visiting him, requesting for the money he borrowed from them for the storage but he was unable to pay back his debts.

Another neighbour who did not want his name mentioned said what even angered the husband the more was that he heard that his wife was allegedly sleeping with other men which led him to attack her with acid with the intention of taking his life and that of his wife.

A family source told LEADERSHIP that the woman was taken to the village to find out the primary cause of the problem since many people suspected a foul play, saying that what happened goes beyond the ordinary.

Hesaid, “This couple had been living happily together for many years. It is surprising to hear of this type of incident happening. To the immediate family, the incident is beyond ordinary and must be looked into.”

On November 24, a free-will donation was organised in a Catholic church in Gwagwa to assist the survivor of this horrid ordeal. It was gathered that the many faithful in the church donated generously to help save Maria’s life who was a member of the church and believed to be a member of the Catholic Women Organisation (CWO) in the branch.

But whether this assistance would reach Mrs Eze on time and save the situation remains a figment.