Home Gossip News I am a Committed Church Member, I Was Lured With N70,000 To Join The Robbery Gang – Robbery suspect

I am a Committed Church Member, I Was Lured With N70,000 To Join The Robbery Gang – Robbery suspect 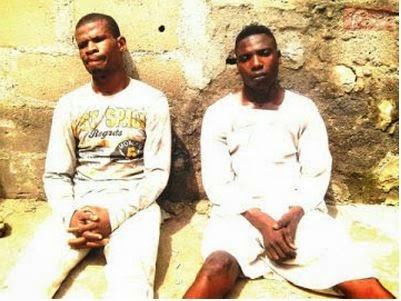 A suspected armed robber arrested by the Lagos State Police Command, Felix Odion, has said he never missed a church service despite the fact that he robbed for a living. Odion, who was arrested by the Special Anti-Robbery Squad along with his partner, Titus Anthony, on November 22 from a hideout in Ifo, Ogun State, said he was lured into joining a robbery gang and insisted that he was a committed church member.

The suspects were apprehended by the police for allegedly snatching expensive vehicles in different parts of Lagos, one of which had been recovered. According to the police, the recovered vehicle is a Toyota Camry 2004 model. Speaking with PUNCH Metro, 23-year-old Odion, said he was given N70,000 from the first robbery operation, adding that he had gone out with the gang only on two occasions. He said,

“I live at Arowojobe Street, Mafoluku, Oshodi with my family. I am also married with two children. I was working as a driver with a plastic company before I was sacked. When I was laid off two months ago, I became penniless and I needed to make ends meet. But I did not think of robbery because I am a Christian. I hardly miss any church service. I attend a church in Oshodi. I met the gang at a beer joint in Oshodi and one of them told me that we could do some work together. I didn’t know it was robbery. When they snatched the first vehicle, I was given N70,000. It was after my second participation that I was arrested.”

Odion, who hails from Ugbowo, Edo State, added that he was arrested last Saturday in his house while his family was preparing to go to church. The weapons used by the gang were still with a fleeing member, identified simply as David, who evaded arrest and was also said to be the gang leader.

Meanwhile, 28-year-old Anthony from Oredo, Edo State, said they snatched the recovered Toyota Camry on a bank premises in Oshodi, after the owner withdrew money from the Automated Teller Machine. He said,

“That Toyota Camry was our third operation. It was snatched on the evening of the Tuesday before November 22. We monitored a man into the banking area. We watched as he withdrew from the ATM. When he was returning, we attacked and snatched the car keys from him. He cooperated because he was shocked. We drove the vehicle to Ifo where we planned to sell it. One alhaji was waiting to buy the vehicle from us. He stays in Sango Ota, Ogun State. But he is a car dealer in the Seme, Badagry area of Lagos.”

Anthony, who said he used to work as a bricklayer, added that the gang had successfully snatched and resold three vehicles since he joined them. He said,

“I dropped out of school in Junior Secondary School 3. It was one Uche who introduced me to the gang early this year. He has also been arrested by the police. The first vehicle we snatched was a Toyota Camry. We sold it for N180,000. The second and third operations were also Toyota vehicles snatched around the Maryland area. I went into this because of frustration. I always feel sorry for my victims. That’s why I don’t hurt anyone during any operation.”

He said, “They are in SARS custody as investigaions are ongoing.”