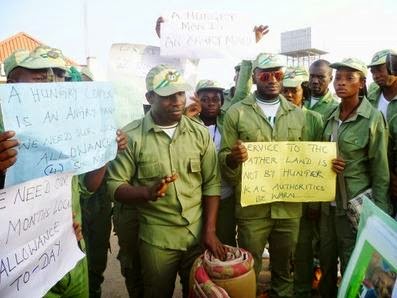 NYSC Batch B corps Members in Kuje protesting over non-payment of 6 months allowance on Monday (24/11/14).

The National Youth Service Corps (NYSC) members serving in Kuje Area Council on Monday staged a protest over the inability of the council to pay six months allowances owed them.

The News Agency of Nigeria (NAN) reports that the corps members, numbering about 60, barricaded the entrance of the council secretariat displying placards on which were scripted “pay us our six months allowances; we are hungry and starving.”

Edna Akpan, the leader of the corp members, told NAN that they had earlier written to the Kuje Area Council authorities demanding that their allowances be paid but the issue was not given the desired attention.

“We have not been paid for over six months and we don’t have good mattresses at the Corpers’ Lodge; we are starving in this place.

“Other corps members that served in this area council were not owed; it’s surprising that we are witnessing such during our time.

“The reason why we embarked on this peaceful demonstration is to show our grievances over the matter.”

Reacting to the development, the Chairman of council, Shaban Tete, told NAN that the council administration, together with the NYSC Coordinator, would hold a roundtable discussion to resolve the issue.

Tete said the inability to pay the corps members was due to the reduction in the councils’ allocation.

He, however, said that the council would ensure ensure that the corps member were paid their allowances.

“The councilors have not been paid their imprest and some allowances for over eight months because we have a shortfall in our allocation.

“Even in my office, we are entitled to some allowances but they are no longer available because we no longer get security vote in the area council,’’ the Chairman said.