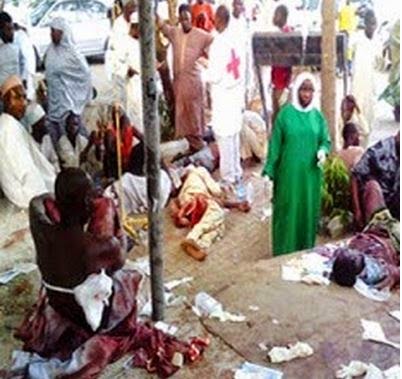 More than 200 people reportedly died in the bomb blast that occurred yesterday afternoon at the Kano Central Mosque where the Emir of Kano usually leads prayers. Some eye-witnesses and rescue officials put the figure at 300, making it one the deadliest bomb attacks in Nigeria.

According to eyewitnesses, three bombs went off one after the other at the 10,000 capacity Mosque during the Friday Jumat prayers. Two went off inside the Mosque, and one outside. And when people tried to flee the scene, gun men opened fire on worshipers. Many of the casualties were children who couldn't run as fast. Some were trampled to death in the mayhem that ensued.

When normalcy returned hours after the attack, the dead and wounded, said to be over 250, were taken to the Murtala Mohammed Specialist Hospital and the Nasarawa Hospital.

The Emir of Kano was out of the country when the incident occurred. He'd left the night before.

President Jonathan also cancelled his meeting with Nigerians entertainers at the Creative Industry event last night because of the blast.