Road Side Blast kills 35 in Adamawa 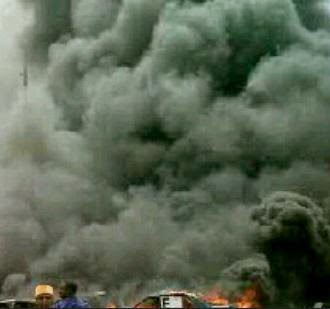 35 people including five military personnel and a local hunter were killed by a bomb explosion today in Mararaba-Mubi area of Adamawa State.

Vanguard reports that eyewitness told Newsmen in Yola, that ,the bomb planted by the insurgents exploded killing 35 people instantly.

According to the eyewitness, the scene of the blast was a busy area where people returning to the area after the recapture of Mubi gather to do one business or the other.

He added that the explosive might have been planted there overnight and it went off while people gather there in the morning.

The eyewitness, who spoke to Newsmen on phone stated that the military has converted the venue of the blast to a check point, since there are heavy presence of people at the spot most of the times.

“My house is some meters from the scene of the incident. I stood outside my compound watching the suburb and all of a sudden, I heard a loud bang which shook the entire surroundings.The few people that were returning to the area started fleeing and the area was immediately cordoned off by the military”