Home Gossip News SSS Opens Up: Why we invaded APC Office in Lagos

SSS Opens Up: Why we invaded APC Office in Lagos 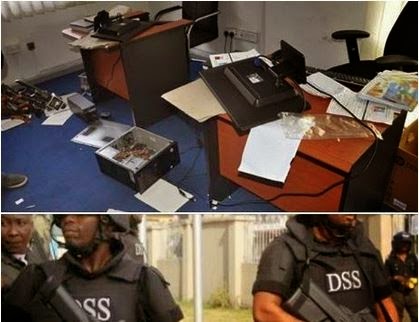 The State Security Services (SSS) has explained why it invaded the APC office in Lagos, saying that it did it for security reasons. The deputy director, Information, Marilyn Ogar stated this while reacting to the attack on the APC office, she added that the service received a petition that the building was used as a secret place to clone INEC permanent voter cards.

She said the agency carried out the operation to investigate the allegation. Ogar also claimed that the SSS retrieved three hard drives, a server, and 31 ‘Ghana must go’ bags of hard copies of data. She also said that many people in the APC centre were arrested.

According to the SSS, “Nobody knew it was an APC office because there was no sign to indicate that it was their office. Based on a petition that some people are cloning INEC permanent voter cards in the building at:

"10, Bola Ajibola Street, off Allen Avenue, Ikeja, our personnel carried out an operation there this morning (Saturday) and recovered a server, three hard drives and 31 ‘Ghana must go’ bags filled with hard data, for analysis.

“We have commenced investigation and this would show whether the allegations in the petition are true or not. There was no sign that the building belonged to APC or any other party, it was when they got to the office after they recovered the data captured, that they learnt that the building was being used by the APC.

"We are being proactive on account of the security situation in the country, you know that the Boko Haram has been targeting Lagos and so, we cannot afford the petition lying low.”