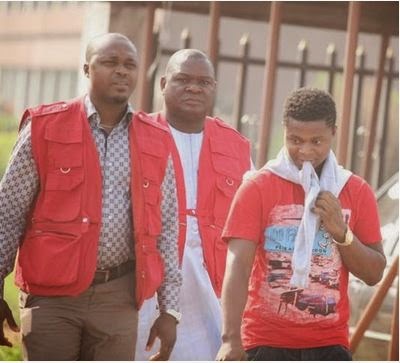 Find the EFCC press statement below...

While Xavi was slammed with a 12-count charge, Aikhaituamen was docked on 6-count charge.

The duo however pleaded not guilty to the charges after they were read to them on November 21, 2014.

The accused persons are alleged to have fleeced a 49 year-old Belgian nurse, Goryczka Janina, whom they met on Facebook, of the sum of fifty five thousand, five hundred Euros.

The victim allegedly met one of the accused persons sometime in January, 2014, who introduced himself as “Collins Page”, a Croatian Engineer resident in Wigan, England.

Within days of their meeting, “Page” contacted her with the story that he was in Nigeria to supervise a construction project in Edo State and that he was having difficulty with his credit card as it had been blocked for security reasons. He solicited Janina’s assistance for desperate cash.

Over the next few weeks, Janina kept sending him money until she had transferred a total of €61,500 through one Emmanuel Okoh based in Cape Town, South Africa and Messrs Junior Best and Cyril Ojiemen.

When ‘Mr. Page’ pressurized her for more money, Janina confided in a friend who told her that she might have fallen into the hands of scammers.

In view of the plea of the accused persons, prosecuting counsel, G. K. Latono asked for a trial date and prayed the court to remand them in prison custody.

Counsel to the first accused person, P. E. Onobun and counsel to the second accused C. N. Dike prayed the court for a short adjournment to enable them file applications for bail.

Justice Ikponmwen adjourned the case to December 8, 2014 for consideration of bail applications and ordered that the defendants be remanded in prison custody.

Two of the charges against Xavi read:

Count-1: “Gabriel Osereme Xavi (a.k.a. Collins Page), Aikhaituamen Best Junior, Ojiemen Cyril (still at Large) and Emmanuel Okoh (still at Large) sometime between January and February 2014 at Benin within the Jurisdiction of this Honourable court with intent to defraud, conspired to obtain money by false pretence from Goryczka Janina, offences contrary to and punishable by Section 1(3) of the Advance Fee Fraud and Other Related Offences Act, 2006”.

Count-2: “Gabriel Osereme Xavi (a.k.a. Collins Page) and Emmanuel Okoh (still at Large) on or about the 31st day of January, 2014 at Benin within the Jurisdiction of this Honourable court with intent to defraud, obtained the sum of €40,000 (Forty Thousand Euro) from Goryczka Janina on the false representation that you were a Croatian Engineer handling a road construction project in Edo State, Nigeria and the money was for purchase of equipment and materials towards the project, which representation you knew to be false”. 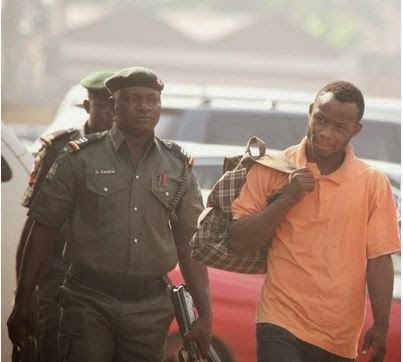