WARNING to all Parents! 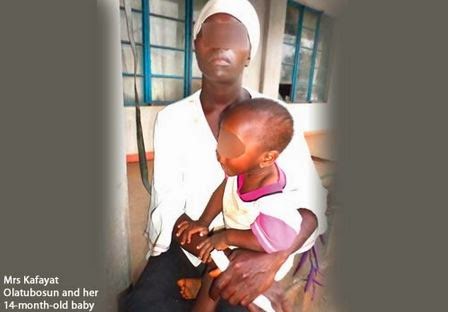 A woman simply identified as eleha (woman in purdah) last Tuesday November 18, 2014 disappeared with 4 kids at a neighbourhood home lesson in Idi-Omo area of Ibadan, Oyo State. And according to Tribune, the children are yet to be found till the writing of this report today.

The four missing children, whose names were given as Abdulsalam Aderibigbe, Abigail Adegunju, Chidiebere and Onyiyechukwu were reportedly taken away by the eleha who disguised as someone in need of an employment. She struck within 30 minutes of starting her job as a lesson assistant.

The 33-year-old proprietress of Mrs Kafayat Olatubosun, has described the incident which led to the disappearance of the four pupils in her care as one that is like a devil stalking her, after which he crept in and struck.

According to Mrs Olatunbosun who is nursing a 14-month-old baby and is currently kept in protective custody at State Criminal Investigation, Iyaganku, Ibadan:

“I started operating a neighbourhood lesson for children at Sagbolada Compound, Idi Omo, Ibadan in 2009. I rented a space in the compound and I pay N500 monthly for it. I have about 35 pupils between the ages of one-and-half and three. Sometimes, primary school pupils sent home from their schools because of non-payment of fees are brought by their parents so that there would be no vacuum in their academic lives. I collect N20 daily for each child and the lesson hours are between 8a.m. and 1p.m.”

“I had been working alone all the years, with regular assistance from my husband and a few elderly women staying within and around the lesson. Whenever I wanted to move round to pick children from their homes, my husband would stay with the ones already in class. Same would happen in the afternoon until the last child had been taken home. Whenever he was busy in the shop where he works as a lotto agent, the women who were like my in-laws would assist me.

The woman who did this evil work (kidnapping) had been coming when I was still pregnant with the 14-month-old baby I am nursing. She kept pestering me that she wanted to work with me but I told her that I did not need assistance.

About a month after I resumed work, having spent 41 days at home after delivery, she came again and I still insisted that I did not need an assistant. She told me that she wanted to leave where she was working because she was being owed salary. I replied that I would not a similar situation to occur in our relationship because the children were enough to take care of my own needs.

I told her that I would like to inform my husband which I did by calling him. But he could not come because he was busy in his office. The woman told me she would come back the following day. The following morning, when I got to the lesson, at a little after 8a.m., I met the woman waiting for me.

Shortly after, my husband came and saw her too. I said I would be paying her N3,000 monthly and she agreed. My husband left for his office and I decided to make the rounds to pick my pupils.

I went the first round to pick the children and I met the lady on my return. I went the second round and still met her. Even some parents who brought their children themselves saw her.

It was on my return after the third round that she was no longer around. I also noticed that one of the children, Abdusalam, was missing. I shouted and the elderly women around came. I quickly called my husband on the phone and he came. I met one of the parents who just brought her child in and she said she did not meet anyone.

That was how we noticed that Abigail, Samson, Chidiebere and Onyiyechukwu were also missing. The last two children are siblings Samson, who is three years old later walked back to us.”

When asked if she could identify the woman, Mrs Olatunbosun replied that she could.

Crime Reports learnt that the Idi Omo neighbourhood was immediately thrown into confusion as residents, especially the youths and parents of the missing pupils, started searching for the woman and the children. The mother of two of the missing children who are sisters was reported to have collapsed immediately and had since been on admission. The older of her two kids is three.

But the police image maker in Oyo State, Olabisi Okuwobi-Ilobanafor said that Commissioner of Police, Kola Shodipo has put his men on their toes to unravel the identity of the woman, with a view to arresting her.