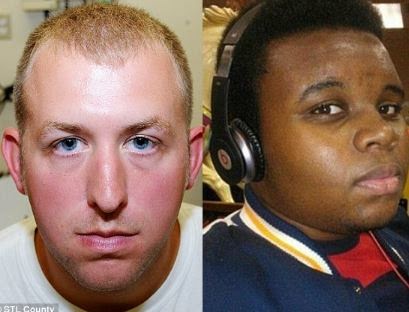 Officer Wilson has been set free by a Grand Jury and won't be indicted for shooting and killing Micheal Brown who many say raised his hands in the air before he was shot.

However, Wilson who the jury said was indeed trying to apprehend Brown in connection to a convenience store robbery,claimed that Brown was much more

aggressive and that he taunted him, saying:


sponsored post
Recounting how he shot six bullets into his body, Wilson said in his police interview released as part of the Grand Jury evidence,that he was completely calm at the start of the incident as he stopped Brown and his friend Dorian Johnson as they walked along the street in Ferguson, Missouri.He claims he told them:

‘Hey guys, why don’t you walk on the sidewalk?’ to which they replied they were nearly home.

Wilson said that he told them:


‘Okay, but what’s wrong with the sidewalk?’ to which Johnson replied: ‘F*** what you have to say’.

Wilson drove off and then drove back to speak to them at which point Brown suddenly punched him and they got into a struggle as he tried to get out of his police SUV.Wilson said he reached for his gun and said:

I was yelling at him to stop and get on the ground.He kept running and then he stopped in this area somewhere. When he stopped he turned, looked at me, made a grunting noise and had the most intense aggressive face I’ve ever seen on a person.
'When he looked at me he then did like the hop...you know when people do to start running. And he started running at me. During his first stride he took his right hand and put it under his shirt and into his waistband.

'He gets about eight to ten feet away, he’s still coming at me in the same way.

'One of those, however many of them, hit him in the head, and he went down right there.


At a later part of the interview Wilson went over the final moments again and described Brown as ‘very aggressive’.He said: ‘


I don’t really know how to describe it. Um, he turns, I look at his face. It was just like intense. It was.
‘I’ve never seen anybody look like that, for lack of a better words, crazy. I’ve never seen that.'It was very aggravated, um, aggressive, hostile. You could tell he was lookin’ through ya. There was nothing he was seeing.’

Pictures were also released with the evidence, showing Wilson's minor injuries in the fight with Brown.