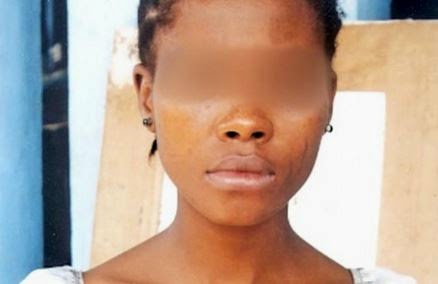 Uche Agunta is a 23 year old lady who has been arrested and is being held custody at the Imo State Police Command.


She was arrested for hunting male organs which are used for money rituals.

The secondary school dropout has been long successful in carrying out the task by luring men with sex and at the height of ecstasy, using a razor blade to cut off their private organs.


Sun Newspaper interviewed Uche. She explained how she was caught when she tried to cut a 38 year old man’s manhood.

“I am a prostitute and I smoke. I have a gang and we specialise in sleeping with men and cut­ting their manhood during sex. We use the manhood for money rituals. I have killed seven men in the hotel in Owerri. They had sex with me after they have paid me N3, 000 or N5, 000. I would be on top of the man and in the process I would bring out blade and cut off his manhood.

I do hand over the manhood to our gang leader. They always promise to pay us N150, 000 for each manhood we could sup­ply, and which they used for money ritual.

I dropped out at JSS 3. I stopped going to school when I lost my fa­ther, but my mother is still alive. I joined a gang where some ladies initiated me into a cult. Our main concern is going after male organ for ritual.

I have given birth to three children. I sold the first and second children for N200, 000 each. The third child is a boy and he is staying with my mother.

I was on top of him and when he was enjoying it, I brought out my blade and I started cutting his manhood. But it hadn’t cut off when he started to shout for help. Then they came to arrest me and he was rushed to the hospital. I was arrested and I have confessed to the police.”

The Imo State Commissioner of Police Abdulmajid Ali confirmed the story to reporters, and also said Uche will soon be charged to court.

The men got what they deserved... Some of them are married ooo... Evil may reign for a thousand year, but justice will caught up with it one day..... They should interrogate her for the remaining of the group members, cus if they don't catch them on time, the lives of her mother and son is in danger.