Home Gossip News Baby Falls off mum's back on Okada, crushed by truck

Baby Falls off mum's back on Okada, crushed by truck 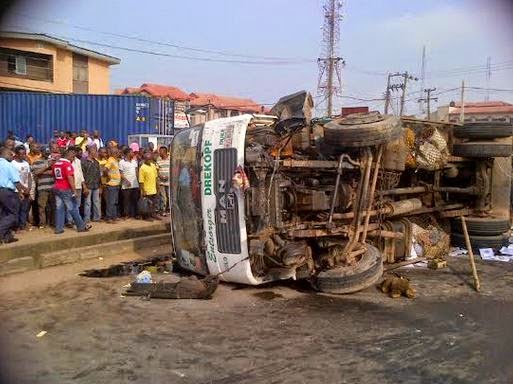 A heavy duty truck, conveying crates of soft drinks, yesterday, at the Okorodafe Roundabout in Ughelli, Delta State, crushed a four-month-old baby girl, who had fallen off the back of her mother travelling on a commercial motorcycle, popularly known as Okada.

According to witnesses, the mother of the baby, who is in her 30s and simply identified as Ese, was said to have been struggling to adjust the wrapper with which she strapped the baby to her back, while the Okada was in motion.


One of the witnesses, identified as Efemena Okiemute, told Vanguard that the baby fell on the middle of the road and was immediately crushed by the truck, which was directly behind the Okada.

When Vanguard visited the scene, officials of Ughelli Command of the Federal Road Safety Commission, FRSC, were seen clearing the remains of the dead baby from the road.