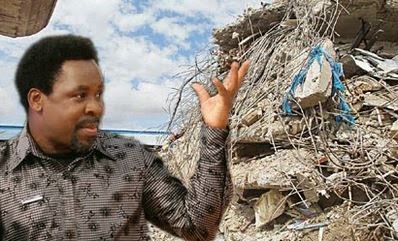 A 37-year-old graduate of Chemistry from the University of Maiduguri, Mr Biedomo Iguniewe, has said the collapsed Synagogue’s six-storey building could have been felled with a high energy infrasonic radiation.

According to Nigerian Tribune,Iguniewe, who described himself as an independent consultant with specific interest in explosives and weapon research, said he was in a position to reach such conclusion, based on his work experience with the Defence Industry Corporation of Nigeria, where he said he had worked for six years.

“I was worried when I heard them talking of controlled demolition. And from the video that I watched, I started asking myself: What could have led to the building crumbling in near vertical fall?”

He said after eliminating all the other possible options, he came to the conclusion that the building could have possibly been fired upon with an infrasonic radiation.According to Iguniewe, an infrasound is a type of sound measuring bellow 20Hz, which is below what the normal human ear could detect.

“The striking thing about infrasound is that you cannot see it but it causes remarkable vibrations when used as a weapon. Those of us who work with the security know that weapons are produced and they are always looking for where to test the weapons.I am of the opinion that what happened that day, especially with the strange plane-like objects seen in the video, was that an infrasonic radiation was fired upon the building and if you observe, you will discover that it took about 30 minutes for the building to come down,” he said.

Iguniewe maintained that the building would be susceptible to being destroyed with infrasonic radiation, since its construction did not envisage that it could be a target of such an attack.He added that,

“It is important for this court to be aware of this option but why it could have been used here is another matter entirely. Since I have been pondering on why a building would collapse the way this one did, this is the most plausible explanation for me.”

The witness said it had become important to consider the option of infrasonic radiation, especially with the repeated movement of the aircraft said to have passed over the collapsed building.

“That object flew close to the building, and that is all that is needed for the infrasonic radiation to reach the building. As far as I am concerned, the repeated over passage of the plane-like object is to ensure that the building received enough dose of the radiation sufficient to bring it down,”

“Engineers generally believe that a structure would fail due to bad foundation and materials but if you go there now, the foundation pillars are still very intact. My position is that the building weakened from the top.”

When asked what would be seen as evidence after a building has been felled by infrasonic radiation, the witness said there would be no material evidence because what the radiation does not generate heat and does not lead to charring or burning as when a bomb was used.