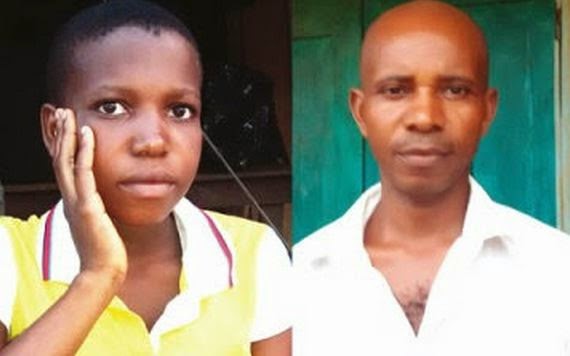 Sitting cross-legged on the concrete floor on one of the blocks of classrooms he now calls his home, the 40-year-old father of three leaned forward to exchange pleasantries with this correspondent.

Okon’s immediate family members and 963 other households had fled their ancestral homes in Efut Obot Ikot in the ceded Bakassi Peninsula in March 2013.

The fisherman lost his first daughter, Blessing, to the cold hands of death in September 2013, after battling with blood cancer for five months.

But Okon’s agony did not end with Blessing’s death. Indeed, he now lives in the pool of the anguish of a man who has to practically sell his child into slavery. To raise funds for the series of medical tests, drugs, feeding and hospital bills incurred by Blessing, he opted to secure loans from someone to save her dying daughter.

With no property to guarantee the loan, Okon gave up his second daughter, Mary, as collateral to secure the sum of N600, 000 given to him in installments.

Our correspondent gathered that the creditor is a civil servant based in Calabar.

“I was desperate to save Blessing from dying. Her situation had become critical at that time. That was the only thing I could do to salvage the situation. I am heartbroken,” Okon said, as his voice faded off, breaking down in tears.

As tears rolled down his cheeks, he recalled the day he ‘sold’ her daughter into servitude.

“I don’t know what came over me. It was sheer desperation I gave out my daughter so that the man would accept to give us the money,”

Okon added, fighting back regrets of what many are likely to regard as condemnable.Our correspondent reached out to the intermediary, Daniel Ufot. He helped Okon to negotiate the N600, 000 loan from the creditor. On getting to the residence of the 59-year-old Ufot, who lives some five kilometres away from the camp, our correspondent found Mary in his residence.

Ufot explained that some plain-cloth security operatives keeping watch on the camp had asked him to bring Mary from Calabar to meet with his father who he had not seen in 19 months.

“I do not know Okon from Adam. But since I’m an expert in money lending, I offered to help him after having learnt of his predicament on how he had been battling to save the life of his daughter.But unfortunately, he could not provide any form of collateral to secure the loan. But the creditor, in his magnanimity, agreed to have her daughter as collateral since she was the only valuable ‘thing’ he could offer,” Ufot said.

In a chat with this correspondent, Mary, who was a junior secondary school 2 pupil before they left Bakassi in March, 2013, has since dropped out of school following their displacement from the oil rich peninsular. She shared horrible tales of inhuman treatment in the hands of her father’s creditor.

Every morning, Mary hawks bottle water on the streets of Calabar, where, incidentally, Mary Slessor stopped the killing of twins. Observers may also spot the irony in the name of the legendary missionary and the enslaved Mary Okon. She added that on any day she failed to exhaust the sales of her wares, her new guardians descended heavily on her, beating her mercilessly in the process.

“The man my father is owing has three female children and some other relatives are also putting up with us in the house. They normally give me a revenue target of N1, 000 daily.And sometimes when the market is bad and I don’t finish selling the water, they beat me up. They treat me very badly. I eat only once in a day and that is in the morning.I wash all their clothes, including the ladies’ pants, and do other house chores, too. And if I hesitate on washing their pants, they get infuriated and throw objects at me at will. I will not feel happy if I go back there,” she narrated.

Yet, Ufot insisted that he only brought Mary to meet with his father as a respite since he had not set his eyes on her for about 19 months.

“There are no signs that they would be repaying the loan. I only obeyed the instruction of the security men. She will be on her way back to the creditor’s place in Calabar,” Ufot said.

When contacted, the Refugee Camp Leader, Etim Ene, confirmed to our correspondent on the telephone on Monday that Mary has indeed returned to the creditor in Calabar.

“Mary has been taken to the creditor’s house in Calabar South. He was taken away by the guarantor, on December 2.”

Efforts by our correspondent to trace the address of the creditor, whose name is given as Asuquo Etim, said to be residing on Atimbo Road, Calabar South Local Government Area, was abortive. The creditor is said to be an employee of the Cross River State Urban Development Agency.

Ufot had earlier refused to allow Mary to travel with our correspondent to her master’s residence for fear of the unknown.Mary’s mother was away in the farm during a visit by The Punch.