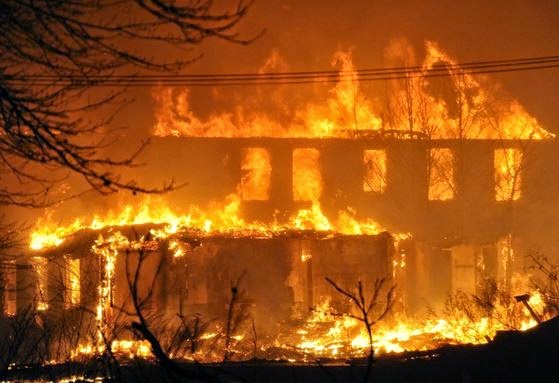 Properties worth millions of naira were also reportedly lost to the inferno which also gutted adjoining trading shops and residential buildings.

Cause of the incident was still in doubt when Saturday Vanguard got to the scene but speculations were rife that the fire began at about 1am, Boxing Day, from one of the rooms occupied by one of the commercial sex workers at a popular brothel in the area.

Corpses of the victims, one young man and that of a young lady believed to be in her thirties were burnt beyond recognition, sympathizers explained.

The raging fire, it was gathered, extended to other apartments and near-by buildings through electricity cables, taking out provisions, electric and pharmaceutical shops in the affected buildings.

“Corpses of the lady and most likely her male client were found on the same spot”, a witness told Saturday Vanguard after their remains were taken to an undisclosed morgue.

Victims and sympathizers were seen lamenting the unfortunate fire.