Husband beheads wife because she didn't Cook his Dinner [PHOTO] 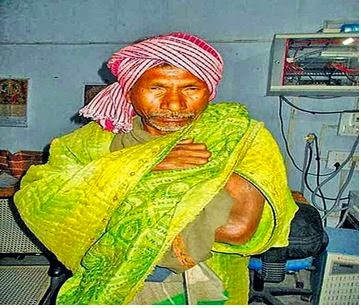 A furious husband cut off his wife's head with a scythe after he arrived home from work to find she hadn't cooked his dinner.

Rintu Karmakar, 60, flew into a rage when he discovered wife Monu, 55, hadn't prepared a meal or done any of the house work and was fast asleep in bed.

He told police that he first tried to cut her head off with an axe while she slept but that had failed so instead he beheaded her with a scythe.

He told detectives: 'I spent all day working and when I got home once again she was asleep in bed after having drunk too much,

'Nothing had been done of the household chores. There wasn't even any dinner for me.'

According to police, Mr Karmakar appeared so calm when he confessed that they doubted he was telling the truth and it was only when he showed them his wife's head that they arrested him.

According to the Indian Express Karmakar often argued with his wife and accused her of having a drinking problem.

Karmakar, 55, remains in custody while police investigate the incident in Jamshedpur, India.

Madness of the highest order, this is a disease to min kind, who should be killed