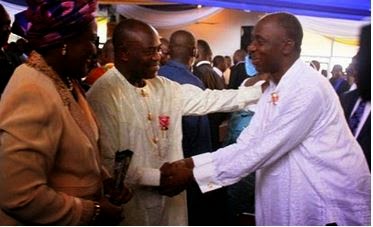 The former governor of Rivers State, Dr. Peter Odili, has expressed regret that he supported Mr. Rotimi Amaechi to become the governor of the state in 2007.

According to PUNCH, Odili said Amaechi dismantled the structure of the Peoples Democratic Party through his (Amaechi) defection to the All Progressives Congress. That but for the quick intervention of a former Minister of State for Education and PDP governorship candidate in Rivers State, Chief Nyesom Wike, the party would have gone into oblivion.

It was the first time the former governor would speak publicly on the strained relationship between him and incumbent governor. He said:

“We thought we did the right thing by supporting Amaechi to become the governor of the state. We left a united state; we also left a united party. The PDP was one, Rivers State is the PDP. There was no other party in Rivers State other than the PDP. Whatever

the party hierarchy said would happen. The secretary is here to support what I am telling you here today.

With all the best intentions, we supported his political career and ambition. We thought we did what was best for the state. As you know, until a man has power and has money, you don’t really know him.

One thing is clear; we have accepted our mistake and we are determined to correct it in 2015. Who would have thought that a governor who won an election on the platform of the PDP would defect with the mandate of the party to another party?

Explaining that no member of the PDP attempted to hijack the party during his reign as the leader, Odili recalled that party officials respected elders during his days as the state governor. He, however, expressed gratitude to Wike for reuniting the PDP in the state immediately Amaechi defected to the APC, along with the former state chairman of the PDP, Chief Godspower Ake, his commissioners, his supporters and 22 out of the 23 local government chairmen.

“I want to thank the governorship candidate of the PDP for the 2015 governorship election and the next governor of Rivers State, Nyesom Wike, for miraculously rescuing the party from disintegration and working tirelessly to unite the members of the party.

By the special grace of God in February, we are going to the polls. The first election is to re-elect President Goodluck Jonathan for a second term. The second election will be the governorship election where our candidate, Wike, will emerge as the next governor of Rivers State.”