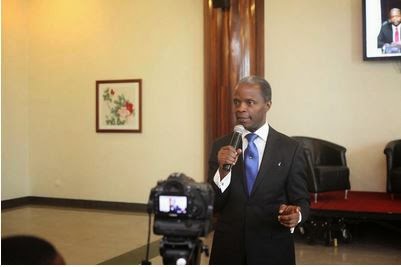 During a parley with journalists at his campaign office in Lagos yesterday, APC VP candidate Professor Yemi Osinbajo criticized the current government, saying its not a responsible one...


"The problem is management of resources. If we plug the loopholes, you’ll see the resources being pooled together. Security is the first duty of any government; you cannot fight a war where leadership is uncertain; where leadership is not sure of itself and its responsibilities.

“The type of leadership we need to successfully fight a war is lacking. The commander-in-chief has responsibility for everything.

You can’t continue to say your enemies did this or that. You’ve got to take responsibility and that is what is lacking in the current dispensation.

“The people I talked to in my bus trips, both men and women asked, ‘What are you doing about the Chibok girls?’ I was surprised that people here in Lagos could be that concerned. It shows everyone is concerned. My take is that as the president, you should visit these places, talk to them and let them see that you are doing something. And one of the things to be done is equipping the military.”

“We have reached a point where we need to draw a line because this country can’t continue like this. A few days ago, we heard that some billions were missing from the oil fund. You and I know that all this is so because there are no consequences. What is required is an administration where people believe that the number one man will not tolerate corruption. That is the first step.”