Luckiest Boy Alive: Meet the only survivor of Class 9 after Pakistan School Massacre 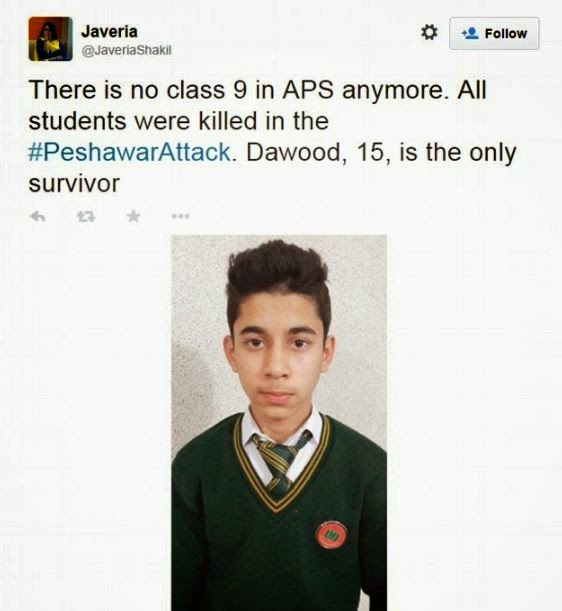 A boy is being considered one of the lukiest boys alive after he missed going to school because his alarm didn't go off. Dawood Ibrahim's alarm clock failed to work and he overslept and avoided getting caught up in the massacre at his school in Pakistan.

The 15-year-old is now the only member of class 9 left at the Army Public School in Peshawar after terrorists slaughtered everyone of his classmates.

His older brother, Sufyan Ibrahim, confirmed his remarkable escape to The Express Tribune of Pakistan.

'It was fate. No one from his class survived. Every single one of them was killed. 'It's believed that his class may have been murdered by one of the gunmen detonating a suicide vest

Meanwhile, Ehsan Elahi, 13, told how he survived by playing dead after being shot twice in the arm as militants '

Speaking from his hospital bed, the eight-grade pupil said he was being taught first aid by army instructors in the main hall when he heard the sound of gunfire drawing nearer.He said: '

Our teachers and instructors asked us to calm down but the sound of the bullets started coming closer and closer.

In the next minute, the glass of windows and doors of the hall smashed with bullets. Some people started kicking the hall doors.'

He said that situation created panic among the 100 students in the hall.

'Everybody was trying to find a place to hide but there was not such places in the hall.

'The students were crying and weeping. There were only chairs and benches to hide behind in the hall. I jumped behind a bench and laid on the ground.'

He said the attackers burst in and started 'spraying bullets like hell'.

'I saw army instructors falling on the ground first. I saw many of my friends getting bullets on their heads, chests, arms and legs right in front of me.

'Their body parts and blood were flying like small pieces of cotton in the class room.

'Warm blood and flesh of my friends fell on my face and other parts of my body. It was horrible. They kept on firing bullets for at least 10 minutes and then stopped. It was a pause of a maximum of a minute. Next moment, they started spraying bullets again towards those who were crying with pain or moving. I also received two bullets on my right arm.

'I wanted to cry with my full voice but I held my pain and did not cry because it meant death.

'They were not ready to leave alive even a single person present in the hall. After around 15 minutes, we heard some bullets shots from outside. I think army soldiers reached the school by that time and they fired those bullets. This diverted the attention of the attackers. They ran out from the hall. But, I did not move or cried for next 10 minutes unless army men came to rescue us.