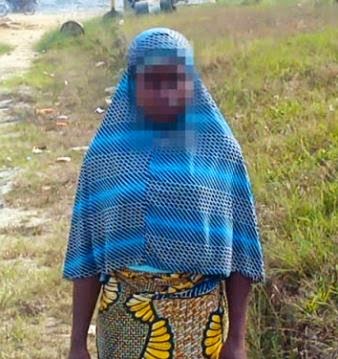 Our correspondent gathered that Alhaji and Mr. Agbotome Denis, who adopted the victim, had been friends for two years.Punch Metro learnt that the suspect abducted the 13-year-year-old girl, around the Arepo area of the state on Sunday, December 14 while she was hawking fura.
Our correspondent also learnt that the victim and her sister, Taiye, had left home around 9am on the fateful day, but the latter came back at 1pm.Her parents said they became confused when she did not return home at about 4pm.


Punch Metro, however, learnt that the victim had almost sold all the wraps of her goods when Alhaji offered to give her a ride home in his car.

The suspect, who was said to be in his 30s, reportedly threatened to kill her when she raised the alarm that the car was not heading for her residence on Isijola Avenue, OPIC Estate.

However, Alhaji was said to have freed the victim last Sunday, seven days after she was locked up in a room.

It was learnt that the suspect was eventually arrested on the same day after the family reported the incident at the station.

Speaking with our correspondent, the victim said her abductor left her in isolation all day although he did not touch her.

She said “Two wraps of fura were left in my tray when Alhaji saw me and offered to take me home. They were three inside that car, but I do not know other two. I told him not to bother that I wanted to collect money from some customers along the way home, but he insisted and promised to stop by for me to do so.“As we moved on, I complained that that was not the route to my house. He shut me up and vowed to kill me if I shouted. He threw my tray away and took me to a room.

“He would place food before me and lock me up in the morning until he came back in the evening. He did not do anything to me. When he eventually released me, I was unable to locate home. It was my mother’s friend that saw me wandering around and took me home.”

Denis, a national of Benin Republic, said he could not fathom the rationale behind his friend’s action.

“He always comes to our house and all my children know him as my friend. There is no misunderstanding between us and I do not know why he did that,” he said.